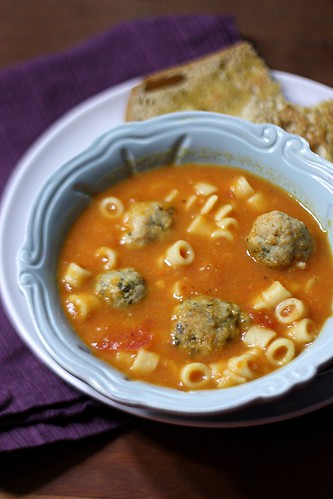 I’ve mentioned before that I don’t like tomato soup (more than once, apparently. I guess you’re prone to repetition when blogging for 8 years). It’s because I like more substance to my soups (especially because we do often eat them as a meal) and though I adore tomatoes, I don’t really like very concentrated tomato-based soups. They are a bit too tomato-y for me, if you will.

But this soup, I knew I would like. The tomatoes didn’t seem quite as prevalent, and clearly with both meatballs and pasta, this soup is pretty hearty. Bridget said the meatballs and pasta almost put this in the Spaghettios category and I would probably agree, but I’ve literally had Spaghettios only once in my life, in college, so I’m not really experienced enough to make that comparison (let’s be real, though, we all know this is way better).

Everyone really loved this soup. Ian finished his before I even had like 3 bites of my salad down, and then continued to grope me with tomato-sauced fingers asking for more until I got him some. (One day, dinners will be a little more…relaxing, right?).

I did increase the amount of broth, not only because of my preference for broth to more tomatoes, but because I made this a day before we were going to eat it, and I knew the ditalini would continue to soak up the liquid overnight. I wanted it to stay a soup, and not…well, a pasta dish.

Now, tell me, what are your favorite soups? Because soups are my FAVORITE thing to make, and once the first one is out of the way (okay, okay, we’ve already had two…), there’s no stopping me. 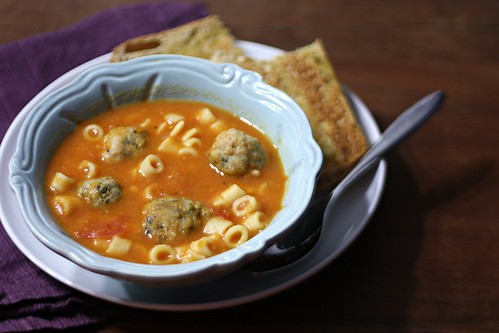 Tomato Soup with Pasta and Meatballs

To make the meatballs, lightly mix all the ingredients together and form into about 30 meatballs. (I used around 1/4 heaping tsp. of salt; I didn’t add any salt to my pesto.)

To make the soup: Heat a small stockpot or Dutch oven over medium heat and add the oil. Stir in the onion, carrot, celery, and a pinch of salt. Cover and cook, stirring occasionally, for about 10 minutes. Uncover and continue to cook an additional 5 minutes or so, until the mixture is dry. Add the garlic, stirring until fragrant (30-60 seconds). Stir in the chicken broth and tomatoes and increase the heat, bringing the mixture to a simmer. Reduce the heat to low, cover, and simmer for about 20 minutes. Use an immersion blender to puree the soup (or carefully move the mixture to a food processor and process until smooth, then return to the pot). Season to taste with salt and pepper if necessary.

Bring the mixture to a boil and then add the meatballs and pasta. Cook, stirring often, until the meatballs are cooked and the pasta is tender, about 8 minutes.

15 thoughts on “Tomato Soup with Chicken Pesto Meatballs and Pasta”