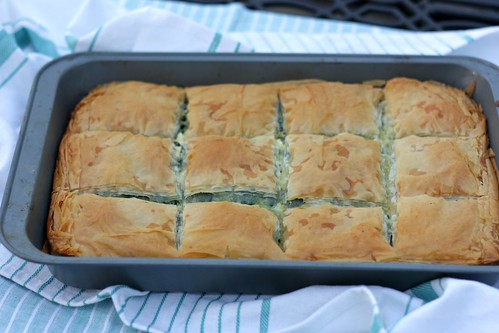 When I did the reader poll a few months ago, one of the most common answers for what you’d like to see more of were Greek recipes. Given my blog’s moniker, I don’t blame you.

I’ve had a hard-ish time expanding the Greek repertoire on here because the blog’s been around for so long that I’ve posted nearly every Greek dish I’ve had growing up (although some of the posts are…not pretty, to say the least). There can be variations on common dishes, surely, but I often hesitate to call some things “Greek” when really they may be fusion or the only Greek thing about them is feta (a pet peeve of mine) and, anyway, I’d  have the European Blog Police on my hands for anything they did not deem 1 million percent authentic. Others I honestly haven’t thought to post because their commonality for me makes me not even consider it (I realize this is silly; they may not be common to YOU, after all). Finally, it can be because I just haven’t—or don’t—measure ingredients, which makes them difficult to blog. (OR, it’s a dish like gemista/stuffed vegetables, which I have made countless times and still cannot manage to get “right” enough to post. Sigh.)

Anyway, spanakopita is sort of a combination of many things. We don’t eat it often because…I don’t know. I guess I tend to make miniature “cheater” spanakopita. They aren’t really easier, I guess, but they are nice for when you don’t want to work with phyllo or you want to use them as appetizers or portioned items. I also like miniature spanakopites and tyropites better, probably because the crispy, buttery phyllo is the best part, so it’s nice to have it envelop everything. 🙂 And, the measuring thing. I basically never measure fresh herbs. Never. Even here I kinda sorta did, like more than normal, so I could write something down. Basically because I didn’t think “a shitload” of dill was necessarily an appropriate measurement for a blog.

Spanakopita is really not difficult to make at all. I’ve had issues with phyllo over the years but honestly, it’s been so much easier for me to work with lately so maybe those Greek genes finally kicked in. Ian is not the world’s biggest spanakopita fan, which is a bummer (he likes the mini pies well enough, though, because there is less spinach and more crispy dough), but Zachary is spanakopita-obsessed. He is often telling me I don’t make it enough. When I did this last time he made me promise to save him some because he not only wanted to take it to school for breakfast, but wanted to eat it alongside other dinners for the week. 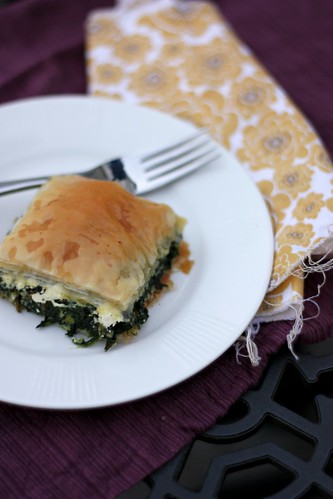