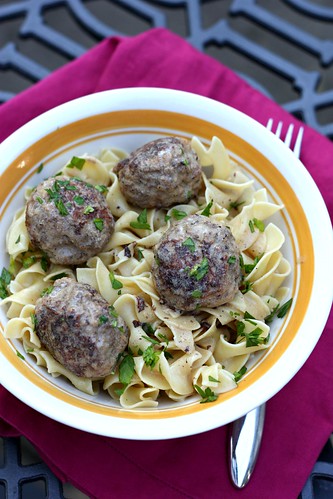 I held off on posting this for a little bit because I figured you guys were MEATBALLED OUT. But then some time passed, and last week we  had fall-like weather—which I totally associate with Swedish meatballs for some reason—so I moved these up. And now it’s a million and a half degrees outside again!

I posted a Swedish meatball recipe way back in the day and there was nothing wrong with it; in fact, it was extremely similar to the version I’m posting below. It just needed a slight facelift and a new picture since it was 9 years old and all. Sometimes even *I* forget I have a pretty deep archive, so it’s a good reminder to myself, too, that we should really eat more Swedish meatballs. 🙂

I’ve always loved Swedish meatballs. I think that hint of allspice just reminds me of the warm spices Greeks use to cook meat, so it makes sense. And nutmeg just makes everything better. Add to that a slightly creamy sauce and egg noodles (which, really, are the best kind of noodles) and I’m a pretty happy camper—as are the other members of my family. 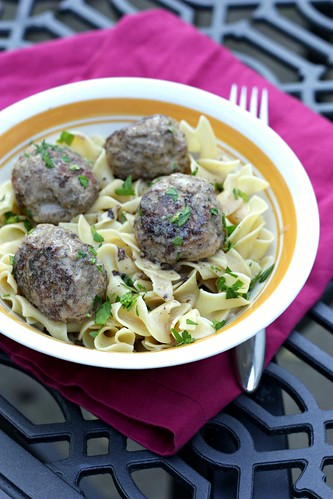 Cooked egg noodles, rice, or other starch for serving

To make the meatballs: whisk the egg and cream together in a large bowl. Add the bread and stir to combine. Let sit for 5 minutes or so. Add the remaining meatball ingredients, except for the oil, and mix together lightly with your hands or two forks, just until combined. Form into about 25-30 1″ meatballs. Heat a tablespoon of the oil in a large nonstick skillet over medium-high  heat. Add half the meatballs in a single layer to the oil.  Cook the meatballs a few minutes per side, until just slightly undercooked. Transfer to a paper-towel lined plate. Repeat with the second tablespoon of oil and rest of the meatballs.

To make the sauce: Return the empty skillet to the pan and melt the butter. Add the flour and whisk constantly until it’s light brown. Whisk in the chicken and beef broth and brown sugar. Bring to a simmer. Continue to simmer until the sauce is reduced to about 1 cup, which will take approximately 5 minutes.  Stir in the cream and return to a simmer. Add the meatballs back and simmer for about 5 minutes to warm them through and finish cooking. Add the lemon juice and season the sauce to taste with salt and pepper.

*Note: You can also use evaporated milk to save some calories.