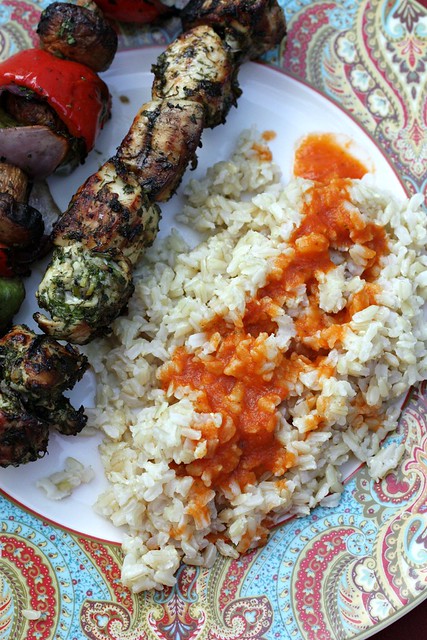 If you’ve ever eaten at a Greek-American diner in your day, you’ve likely seen this sauce. It often comes on top of rice, whether you order a chicken kabob or a gyro. It’s a thin tomato-based sauce that is really simple but strangely addictive. We never made this at home for some reason (at least, not on its own), and I never managed to really get much of a recipe from a family member (nor was/am I interested in attempting to scale down a recipe that serves a restaurant), so I’ve been making this myself and tweaking it here and there. I don’t know what it is about this stuff but I want to eat it all the time.

This is often served with rice that has been cooked in broth or bouillon. I like using brown rice most of the time, and I hate cooking it the “regular” way so what I do when I want brown rice to get some added flavor from broth without straying from my tried and true brown rice method is either to bake it or to boil it in a pot of water for about 15 minutes, and then put the drained rice in a saucepan with broth (at that point, roughly half of what you would have used had you made the rice according to package directions), and cook normally.

You could, of course, make this with fresh tomatoes, but they aren’t really that great here yet (and I made this a few weeks ago, anyway). Canned tomatoes work really well, so don’t fret. You don’t really use much sauce per serving, so this will make quite a few servings, but we just freeze extras in a few small freezer bags to use at another time (which is also why you are seeing two different pictures. :)) My favorite way to have this is over both rice and grilled chicken/kabobs. With feta on the side, obviously. 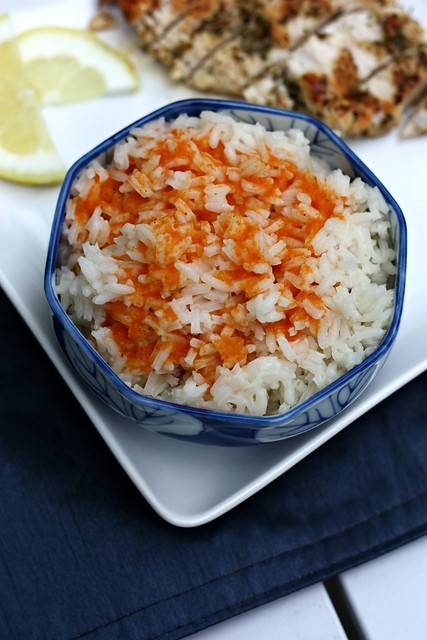 17 thoughts on “Pilafi me Saltsa Domata (Rice with tomato sauce)”