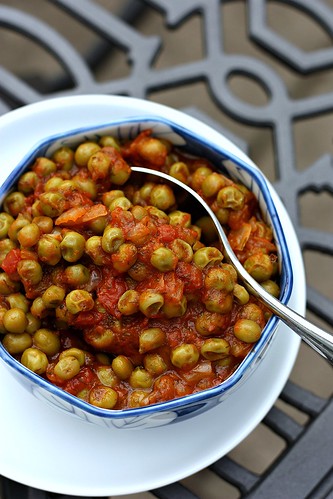 Mpizeli (bees-EL-ee) is one of those things that always seems to be hanging out on the stovetop of every Greek home. I ate truckloads of it growing up and I still love it. It’s great as a side, of course, but I will literally just eat it as a snack—sometimes even cold from the fridge (I know, I’m weird). I actually prefer this pea dish at room temperature, so it’s great for potlucks, parties, and picnics. This kind of-sort of made it on the blog a bazillion years ago, as an alternate version of Greek style okra. It’s one of those things that, while still pretty common for me to make, is so normal I don’t even think about blogging it (likely because until recently I thought I already had. ;))

I put a ballpark dill measurement below but, honestly, I’ve never truly measured it. Even when I’ve tried in an attempt to be more concise with a recipe, I end up adding more as I’m cooking, so it doesn’t really matter. Bottom line is add what you want to add. You’ll probably end up adding a lot more than you think you will, though. There’s something about copious amounts of dill that really makes this. I have a friend who dislikes dill and initially didn’t even want to try this before proceeding to eat bowls full of it.

Also, this is a really forgiving dish. Another reason I haven’t really blogged this before is because sometimes I add a little water or a little crushed tomato as I’m cooking it, and it’s fine for eating but perhaps not for recipe documentation. Bottom line is just taste and add as you go.

Common additions to this dish are potatoes or mushrooms. You can also make a one-dish meal, similar to this kokinisto, with chicken or another protein.

In a 3 -4 qt pot, heat the olive oil over medium heat. Add the onion and cook, stirring often, until translucent. Stir in the tomatoes, 1 cup of the water, peas, dill, plenty of salt, and pepper to taste. Bring to a boil.

Reduce heat to a light boil and partially cover.  Cook, stirring occasionally (and adding water if necessary), for 45 minutes until peas are soft and sauce is thickened. Simmer/lightly boil completely uncovered if your sauce is not thickening. Re-season to taste if necessary.

If you’re adding mushrooms, I add them before the boiling step. For potatoes, add them with about 15-20 minutes of simmer time left, and you will likely need to add more water but check how your peas look first.