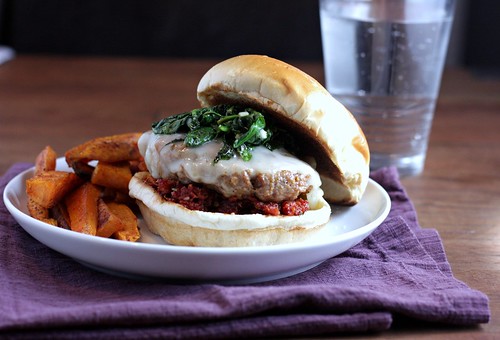 We’re big burger fans in our family (who isn’t?!). In fact, for  his birthday (his FIFTH birthday, omg), Zachary specifically requested burgers (which he has done before), and I was happy to oblige. These are not the ones we happened to have that night, but I can tell you that he loved these, too. He even ate the spinach and he can be pretty finicky about cooked/wilted spinach (likes it raw, though).

I, too, adored these burgers. I’ve been making a different version of a sausage burger a lot lately, because, well, sausage is really good. So, the patties were clearly a win. I was unsure about how the texture of the spinach would play out on burgers, but I thought it went really well. The star, though, was the sun-dried tomato pesto, which lent a little sweetness and a bright punch of flavor to these bad boys.

This recipe comes together pretty quickly. I had planned on making the pesto the day before but didn’t, and it wasn’t a big deal to do it the same day (just note, though, if you are using non-oil packed tomatoes, you will need to leave a little time for reconstituting them in water). If you can find ground sausage (not in link form) that makes assembly even easier. You can definitely buy ground pork (or turkey or chicken) and make your own sausage-flavored patties. I’ve actually done that a few times (see aforementioned talk of eating a different version of sausage burgers) and have been tweaking my recipe so hopefully I’ll post it soon.

I’m already looking forward to the next time we have these, because I know it’s going to be soon.

Form the sausage mixture into four patties and set aside.

Heat the olive oil in a large pan over medium heat. Add the spinach and cover the pan. After a couple of minutes, toss with tongs and recover. Cook until spinach has wilted but is still bright green. Stir in the garlic, season with salt and pepper, and cook for 30 seconds. Set a mesh strainer over a bowl and place the spinach in the strainer. Set aside.

Grill the burgers for 4-5 minutes per side, or if cooking indoors you can broil them or use a skillet (preferably cast iron) with a small amount of oil.  During the last minute, add the cheese to melt (if cooking on the grill or skillet, use a lid to quickly melt the cheese).

Press the spinach down lightly into the strainer with a paper towel, to remove some of the liquid.

Spread about 2 tablespoons of pesto on the bottom of each toasted bun. Top with the burgers and spinach.