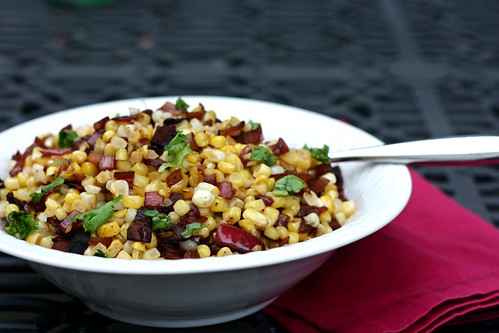 A few weeks ago we picked up the kids from school and turned on the radio as we were pulling out of the lot. Within 3 seconds, I hear Zachary—yes, that’s right, the 4 year old—start whining/crying/moaning for no apparent reason. At first, I thought maybe he had pinched himself in his buckle or something similar, but no. When I asked him what was wrong, he cried, “I WANTED TO LISTEN TO ‘DANCE YRSELF CLEAN.'” That’s right. Not only am I supposed to understand his unspoken desires, but a life without LCD Soundsystem is not worth living.

Four year olds, guys. They are nuts, I’m telling you. We sailed by the “terrible twos” without any issues and thought perhaps we’d won the lottery but then the threes and fours hit and, whoa. These random fits come out of nowhere.

Case in point: recently, Z has decided that he doesn’t want his food to be mixed together. Fine, I will appease him for some stuff, like putting the rice on the side of stir fry instead of underneath it, or whatever. But I’m not going to deconstruct everything, especially when it’s all stuff he likes. So, when he asked what was on the stove and I told him corn mixed with bacon and balsamic, he started stomping his foot on the ground and shouting that he WANTED THE BACON ON THE SIDE. It was bad enough I was committing treason by cutting corn off the cob, but to mix it with other things? Clearly I was trying to ruin his life.

Usually he comes around within about 2 minutes because it’s not like he can NOT eat, since it’s his favorite thing to do. And then he asks for seconds and thirds, says he’s sorry for the fit because he should have tried it first, and typically proceeds to do the very same thing the following week.

So, like I said, he asked for multiple helpings of this, as did Ian. We already know that bacon, red onions, and balsamic go exceedingly well together, so it was no surprise that this dish was great. We had this alongside some roasted chicken (always another hit, pretty sure I am going to have to start buying 2 chickens the way these kids eat) and green beans and it was a great meal all around. 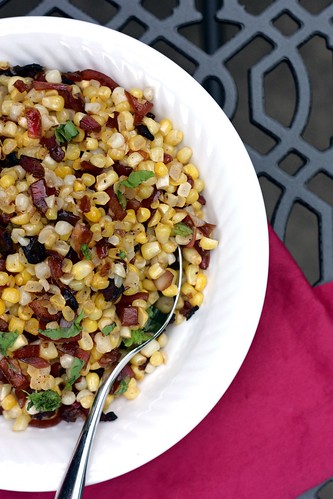 Adapted from The Amateur Gourmet (originally from food52.com)

Heat a large skillet over medium-high heat and add the bacon. Render the fat, cooking until bacon becomes crisp, and then remove the bacon with a slotted spoon and place on a paper-towel lined plate. Drain off enough bacon fat so that one tablespoon remains.*

Add 4 tsp. olive oil to the pan and then stir in the red onion. Saute with a pinch of salt for about 5 minutes. Add the balsamic, sugar, and a pinch of salt and pepper. Bring to a boil and scrape up the bacon bits from the bottom of the pan. Simmer for 15 minutes, or until the vinegar has mostly evaporated.

Meanwhile* heat the additional 2 tsp. of oil in a skillet (I like cast iron). Add the corn and salt and pepper to taste. Cook, stirring often, for about 3-5 minutes. Combine the corn, onion mixture, bacon, and cilantro/parsley in a large bowl, seasoning with additional salt and pepper if necessary. Serve warm or at room temperature.

*Note: I cooked the corn separately, as noted, but there is no reason you can’t do it in the same skillet, and with the bacon fat. I only wish I would have thought of it earlier. Just cook the corn after rendering the bacon, remove with a slotted spoon, and then continue with the recipe, adding the corn back in at the end to warm it through.

9 thoughts on “Sweet Summer Corn with Bacon and Balsamic Onions”