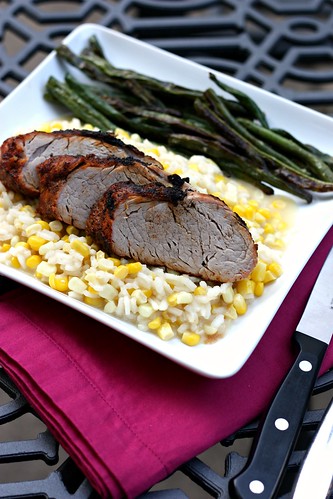 We’ve established that I can sometimes be pretty hesitant when it comes to barbecue sauce. But barbecue dry rubs? I’m always down.

We don’t eat a lot of ribs and rarely make an entire pork shoulder or similarly large cut of meat, but that doesn’t mean we don’t love a good dry rub. Pork tenderloin is always a winner in our house because it’s lean, cooks quickly, and is a good size.

I was debating what to pair with a bbq-rubbed tenderloin so I thought of the usual sides. Macaroni and cheese sounded great, but what I really wanted was some sweet summer corn. After all, you can eat mac and cheese year-round but corn this good only lasts so long! Eating corn straight off the cob is great, of course, but I decided to turn this into a risotto since I had a small amount of arborio rice to use up and my pantry is in a state of chaos, so I really need to, um, clear out.

The rub for the tenderloin is fantastic. And the corn risotto? Oh so good. Sweet, creamy, basically everything that is great about risotto and corn in one dish. Ian in particular went absolutely apeshit over this. Once again, I’m starting to think they’re going to have to get jobs by age 8 if we are expected to afford their food.

I took a pretty traditional approach to this risotto, but as everyone knows barbecued-rub stuff goes really well with cheese and beer, so I think a beer-cheese risotto would be a different but equally great spin on this dish. The nice thing about this dish is that the pork is roasted, so you can concentrate on the risotto. I also roasted green beans, so I didn’t even have to think about a vegetable side later. To get the timing right, you will want to sear the pork tenderloin, and then as soon as you stick it in the oven, start making the risotto. The cook and rest time will be right around the time the risotto is done, but you may want to do some prep before searing, like cutting the corn off the cob. I trimmed my green beans and threw them on a sheet pan so they would be ready to stick in the oven when I was about  halfway done with the risotto. 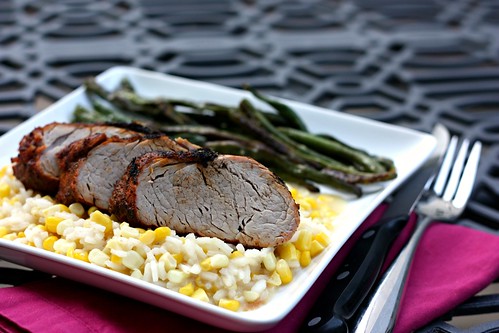 Heat a large oven-proof skillet (preferably cast iron) over medium-high heat and add the oil. Add the tenderloin and sear on all sides, about 2-3 minutes per side. Place the pan in the oven and continue to cook for about 15-20 extra minutes, until pork registers 135-140. Place on cutting board and tent with aluminum foil; rest for 5-10 minutes before slicing.

Cut the corn off the cobs. Reserve a cob (I cut it in half), and place in a saucepan along with the broth. Heat the broth to a low simmer.

In a heavy-bottomed skillet or saucepan, heat the butter and oil over medium heat until melted together. Stir in corn and shallot. Saute until corn is lightly golden and shallot is tender. Add the rice, and stir several times, toasting it until it becomes opaque (about 2 minutes).

Add the wine and continue stirring until it has nearly evaporated. Add one ladle-full of the broth. Stir almost constantly until nearly all of the broth has been absorbed. Continue doing this with the broth, only adding more after the previous addition has been absorbed.  This will take about 20-25 minutes. Test a kernel of rice to make sure it is mostly tender, but still has a bit of a bite in the center.  You may not use all the broth, but at this point I like adding maybe half a ladle-full before removing it from the heat. Risotto should be “loose” and just a little runny.

Off the heat, stir in the cheese, Season to taste with salt and pepper and serve immediately.