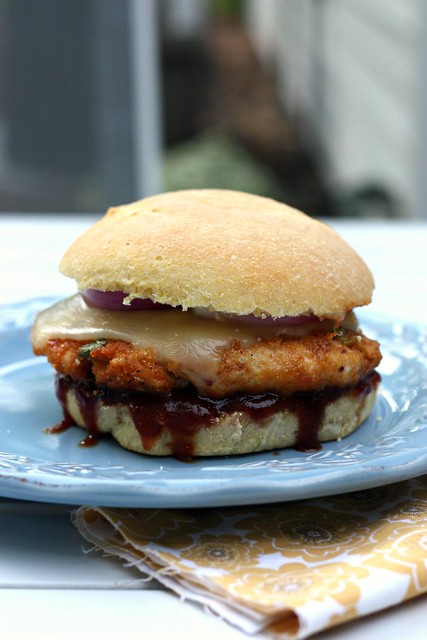 Barbecue sauce and I have a bit of a sordid past. I started out not really liking it at all. I can’t tell you the first time I ever ate barbecue sauce by choice, but it was definitely in my twenties. Eventually I started coming around, first with my love for Sweet Baby Ray’s and then making my own when I discovered that one had HFCS.

I’m telling you all of this as an excuse for why it took me a while to make these burgers. I need to REALLY be in the mood for barbecue sauce or for some reason, it still makes me queasy. I have no idea why, and I can only wish I had similar feelings toward things like cake and nachos.

It’s no secret I love making chicken burgers. Ground chicken is a blank canvas, as far as flavors are concerned, and they can generally be kept pretty lean, too. I’m always looking for new versions, and this one fits the bill. The burgers are flavored with paprika, garlic, mustard, brown sugar, and barbecue sauce. They’re topped with more sauce and some sharp cheddar, which  I have always loved with BBQ sauce. Josie added leftover pulled pork to hers, which would no doubt be awesome, but we didn’t have any, unfortunately. I did decided to put these on yeasted cornbread buns, because who doesn’t like cornbread with BBQ? I was just thinking that these would be pretty awesome on biscuits, too. Because – biscuits.