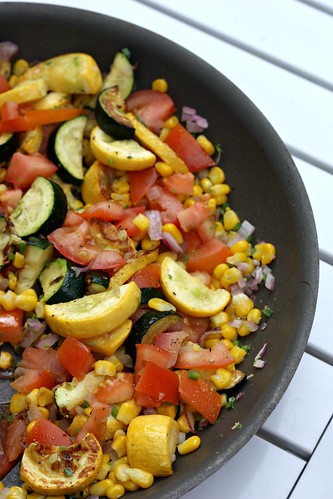 I don’t know about you, but for as much as we eat Mexican fare, I often have a hard time thinking of sides. While beans and rice are the standards, I find that paired with tortillas (as Mexican food often has) we’re talking a lot of carbs and starch. And while we make (and love) the “famous” black beans quite frequently, sometimes you just want something different, or simply in addition to, the beans. Something a little lighter.

Calabacitas are a great vegetable side for Mexican food (or really, any food). The dish is particularly good this this time of year, when zucchini and summer squash are plentiful and tomatoes and corn are perfect. You roast the squash until golden and then toss it with some onions, tomatoes and corn. I added a jalape‏ño because how could you not? Although I didn’t try it, I don’t see why you couldn’t just roast everything to avoid cleaning an extra pan.

My kids were huge fans of this, which is good because Zachary decided recently that his years-running-second-favorite vegetable of all time, asparagus (behind brussels sprouts), is now garbage. I am working through my grief.

Adapted from Self via Apple a Day

Preheat the oven to 400. Toss the zucchini and squash with 1 Tbsp. of the oil and salt and pepper to taste; roast for about about 15 minutes, until golden.

Heat the remaining 2 tsp. oil in a skillet. Once hot, add the onions, garlic, and jalapeño pepper. Sauté until tender. Stir in the zucchini and squash, corn, tomatoes, oregano, and salt and pepper to taste. Sauté an additional 2 minutes before serving.