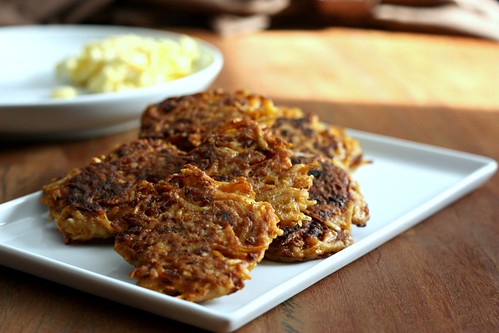 I love pancakes and waffles as much as the next girl (and crepes! and french toast!), but most of the time, I’m a savory breakfast eater. Of course, if I can get a savory breakfast followed by a pancake in place of a piece of toast, then it’s a win all around (take note, restaurants: you should all offer this option). One of the reasons for my love of savory breakfast foods is chorizo. Because when it comes to breakfast, there is nothing greater than chilaquiles with chorizo. Except for maybe huevos rancheros with chorizo. Or an omelet or skillet with chorizo. What is boils down to is I WANT TO EAT ALL THE CHORIZO.

So, these hash browns. Basically, they are shredded potatoes with chorizo mixed in. In other words, you can’t really go wrong. The idea actually stemmed from these chorizo-mushroom-potato tacos, when Zachary said they tasted a lot like hash browns. Turns out I’m not the only one interested in chorizo hash browns, and a quick google search found this recipe. We love to make hash browns on the weekend and these are a great twist on standard hash browns that are really not much more difficult or time-consuming.

Are you a savory or sweet breakfast person? And more, importantly, what can I add chorizo to that I haven’t already? 🙂

Cook the chorizo in a skillet over medium heat. When it’s about halfway done, add the onion and continue to cook until chorizo is done and onions are soft.Set aside to cool slightly while you proceed with the recipe.

Grate the potatoes using a box grater or the grating disc in your food processor. Place them on a clean kitchen towel and squeeze all the excess liquid from them. Put the potatoes in a large mixing bowl with the flour and eggs and mix well. Remove the chorizo from the pan with a slotted spoom and add to the bowl along with salt and pepper to taste, combining well.

Heat a large skillet, preferably cast iron, over medium-high heat and add enough oil to completely coat the bottom of the pan. When the oil is hot, take about 1/4 cup of the mixture, flatten it a little with your hands, and place in the pan. Continue to do this with the mixture, making sure not to overcrowd the pan or they will not brown properly. Cook until each patty is nicely browned on the bottom, about 3-4 minutes, and then flip and cook an additional 3 minutes or so until the other side is well-browned. Transfer to a paper-towel lined plate. Season with additional salt and pepper if desired.