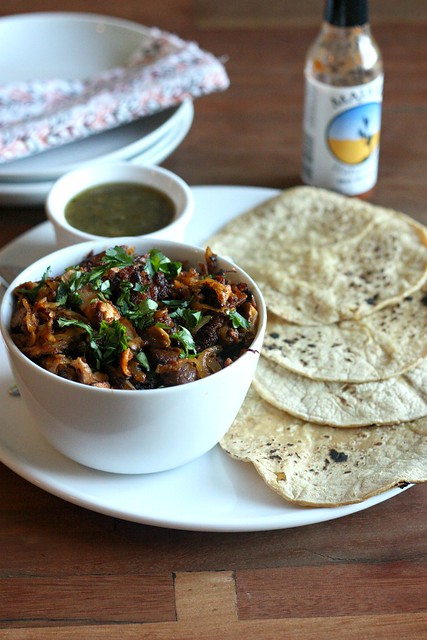 YOU GUYS! These tacos? They are so, so good. Like, I-want-to-be-one-of-those-families-who-has-a-Taco-Tuesday-and-have-these-be-our-weekly-tacos good.

I’ve had this recipe bookmarked in Mexican Everyday for ages, and I’m so angry it took me so long to make them. I have been missing out for way, way too long. These are easily some of the best tacos I’ve ever eaten, and I have eaten a lot of tacos.

Plus? They really couldn’t be any easier. You just cook some chorizo (really, you could just stop right there and these would be great since anything that starts with chorizo is delicious), add some mushrooms and grated potato (I know, kinda weird, right?) and you’re done. Somehow, with those few ingredients and minimal cooking time, something wonderful happens. Zachary actually asked if these were hash browns and admittedly, they are pretty similar (assuming you eat super tasty hash browns), so if you don’t want to eat them as tacos, you could always serve them with an egg and be done. Or, I don’t know, just spoon directly from the pan into  your mouth.

12 oz. fresh Mexican chorizo (if cased, remove casings)
1 medium white onion, halved and thinly sliced
6 oz. shiitake mushrooms, stemmed and sliced
12 oz. potato (about 1 big russet though redskin and Yukon will also work), peeled and grated
Cilantro, to taste
Warmed corn tortillas (I like to place mine right onto a gas flame until they blister a little), for serving
Tomatillo salsa, for serving

Crumbled the chorizo in a nonstick (or cast iron) skillet over medium heat. Cook, stirring often, until the fat starts to render and the chorizo is partially cooked, about 4-5 minutes.

Increase the heat to medium-high and add the onion and mushrooms. Cook, stirring frequently, until they begin to soften, about 3-4 minutes.

Sprinkle the potatoes into the skillet and cook, stirring often, until potatoes are cooked, about 5 minutes. Season to taste with salt.

Scoop the mixture into a serving bowl and top with cilantro. Serve with tortillas and tomatillo salsa.