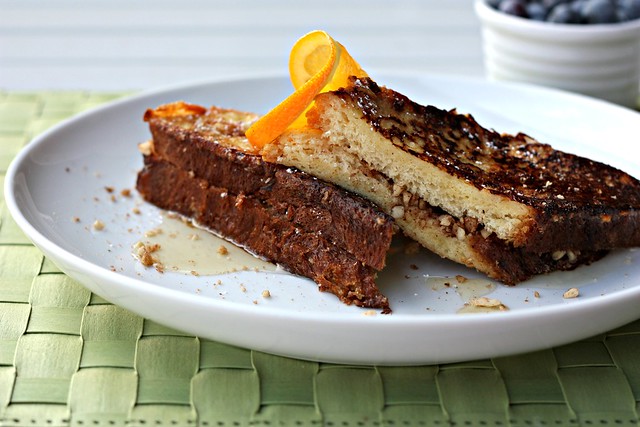 I posted baklava French toast on my blog a long, long time ago. It got a great response and a few people made versions of it on their own blogs, which made me feel super warm and fuzzy inside since at the time I thought my blog was read by about 7 people.

But the post didn’t really have much of a recipe, just a method. And that’s fine, but the picture was also terrible and I wanted to highlight this again, anyway, because I love it.

The basic premise is taking the nut mixture that is found in baklava and sandwiching it between two pieces of eggy bread. I use tsoureki (still had some frozen from Easter), but challah or brioche will work equally well. After a quick egg/milk bath and getting fried on the griddle, the French toast is then topped with a honey-simple syrup mixture prevalent in a lot of Greek desserts.

This is definitely rich and very sweet, so if you like those kinds of breakfasts, this is totally your thing. It’s a great way to get the flavors of baklava without doing all the work—and it’s a good excuse to eat baklava for breakfast.

Place the walnuts, cinnamon, and cloves in a mini food processor and pulse until combined and walnut pieces are crushed.

In a small saucepan, bring the honey, water, sugar, and orange peel and cinnamon stick (if using) to a simmer. Simmer until thickened and syrupy.

Place about 1/4 of the nut mixture on a slice of bread, and top with another slice of bread. Repeat with the remaining bread/nut mixture. You may have a little extra nut mixture and you can just use it at the end as a topping/garnish.

Whisk together the eggs, milk, and vanilla extract in a baking dish or shallow bowl. Place the 4 “sandwiches” in the egg mixture and then carefully flip to soak the other side.

Heat a pan or griddle with butter and add the French toast. Remove the sandwiches from the custard and fry until golden; carefully flip and cook until the other side is nicely browned.

Serve the baklava French toast with the honey syrup (and additional crushed walnuts, if desired).