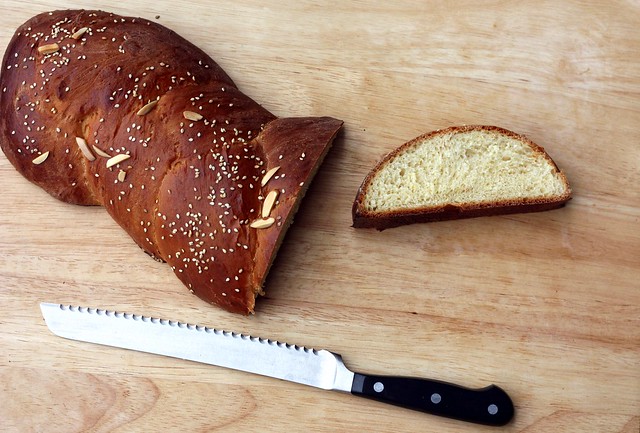 I’m SO excited to have finally made my first tsoureki! Tsoureki (tsoo-reh-kee)  is the traditional Greek bread made at Easter (Pascha) time, and I love it. It’s slightly sweet and gets its unmistakable flavor from mahlepi, which is made from cherry seeds. I had my grandma bring some  home from Greece, but I actually ran across some in a semi-ethnic grocery store near me recently, so it can definitely be found in the states. You can also purchase it from Penzey’s.

I’ve been wanting to make my own for years, but the problem is, a recipe for a loaf or two (or even 4) of tsoureki doesn’t seem to exist. All recipes, my grandmothers’ included, use at least 30 cups of flour. No joke. Most Greeks always have a loaf on hand to take to someone else’s house, or just to give to someone who drops by. But I definitely don’t have that need, and also didn’t want to even think about cutting down a recipe that huge.

Thankfully, I found this recipe for 2 (sort of) loaves. I ended up halving the recipe below, which should have made one loaf. And it did. But I should have definitely, definitely made it into two.

Because it was huge.

I had to put it diagonally on my sheet pan just so it would (barely) fit and of course it stretched the limits of the pan and I ended up having square-ish ends, and not looking very braided when it was all said and done.

See what I mean? 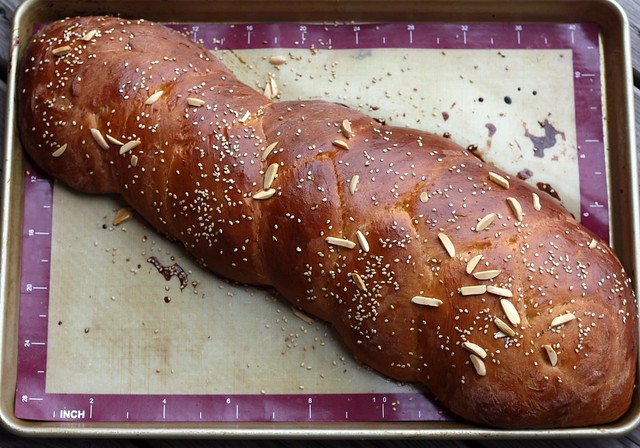 For a minute, I was starting to wonder if the rising bread would bust through the oven door.

Anyway, despite its  massive size, the tsoureki turned out fabulously. It tasted exactly like the slightly sweet, eggy bready I’m used to. Many people compare it to Hawaiian bread, which I can see. I’d liken the texture and eggy-ness to challah, but tsoureki is a bit sweeter.

Normally, tsoureki should have a dyed red egg or two baked right into the loaf, but I had zero interest in dying eggs red (maybe next year with Zachary).

Update: This is what the recipe looks like if you make 4 loaves vs. 2 (left) or 2 loaves vs. 1 (right) as I did for half the recipe. Excuse the phone pics. Much better outcome. 🙂 Recipe updated to reflect the changes. 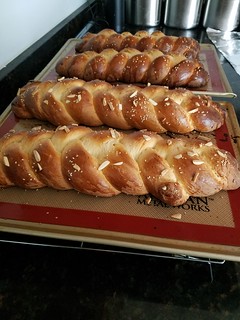 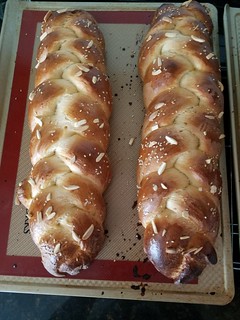 In a large bowl, mix together the milk, yeast, 1 cup flour, and 1/4 cup sugar. Cover with a clean kitchen towel and proof for one hour.

In a separate large bowl, whisk together 7 cups of flour, the remaining 1.5 cups sugar, salt, orange zest, mahlepi and mastiha (if using). Make a well in the center of the flour mixture; add the yeast mixture, butter, and eggs. Work from the center outwards, bringing flour into the well, stirring the mixture until a dough begins to form.

Knead the dough, either on a heavily floured work surface for about 10-15 minutes, or in the stand mixer, using the dough hook (adding flour to make it less sticky and clear the sides of the bowl) until the dough no longer sticks to  your hands. Place the dough in a very large oiled bowl, turning once to get oil on the other side. Cover with a kitchen towel and allow to rise for 2 hours, until doubled in size.

Punch down the dough, and divide in half, and then divide each half into 6 equal portions. Roll each of the 6 pieces into a 12-15″ rope. Lay 3 strips side by side (I like to do this right on the parchment or silicone mat I’m going to bake on). Pinch together the strips at the top, and then braid them. Pinch the bottom together. Repeat with the remaining ropes, making 4 total loaves.

Place the braided loaves on parchment or silicone-lined baking sheets. Cover with a towel and let rise for about 2 hours or until doubled in size.

Whisk together the egg yolk and milk. Brush the mixture on top of both loaves evenly. Sprinkle with slivered almonds and/or sesame seeds.

Bake for about 25-30 minutes, swapping the baking sheets halfway through.  If loaves are getting too browned before they are done, tent foil over the top.