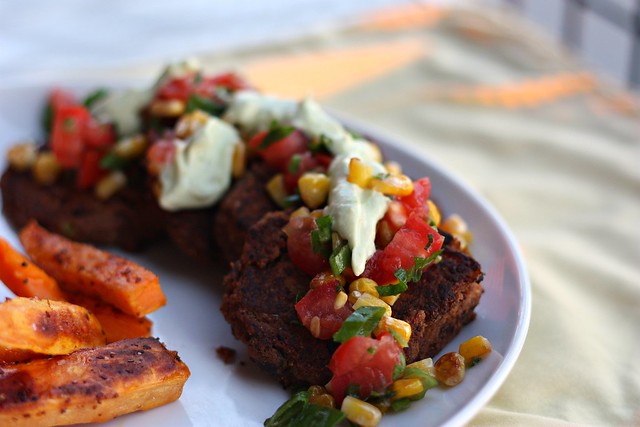 When you’re into food, whether or not you’re a food blogger, your Christmas and birthday wishlists tend to feature some odd things. In the past, mine have featured everything from a cast iron skillet (which my husband dragged home from work on the train, in his bag, so I wouldn’t see it when he got home) to a homemade light box I was too lazy to make myself.

This year, I’m asking for a squeeze bottle.

Because avocado cream looks much better when you make pretty lines with it using a squeeze bottle, rather than just plop it down. Know what I mean? 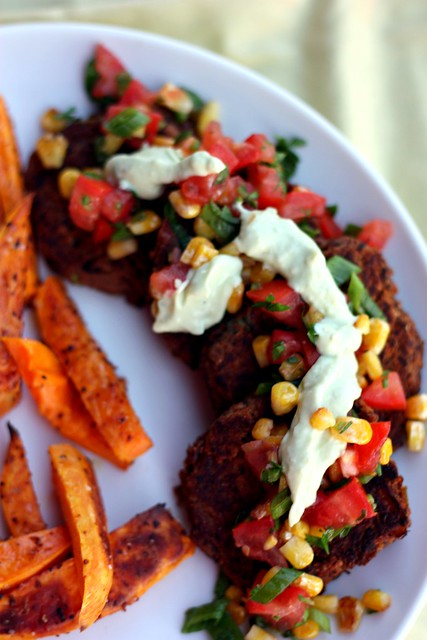 We’ve been eating a lot more vegetarian meals lately and, while I do add them to the weekly menu, this one actually came about because I had forgotten to thaw something for dinner. We didn’t have any buns, so I decided rather than make black bean burgers, we’d have patties with accouterments (I try to use that word as often as possible).

I made the patties similarly to others I’ve made in the past. I added a roasted red pepper, because I like that combination when I make our favorite vegetarian enchiladas. I wanted something crisp and cool for the topping, so I opted for a corn relish and avocado cream.  Fresh corn would be great when making this dish, but I missed the window, so I just used some thawed, frozen corn, which worked perfectly fine. I also used jarred roasted peppers because I had some in my fridge but feel free to roast fresh ones.

I added less chipotle than I normally would when making these, because there was already jalapeno in the relish, and I wanted to make sure Zachary would eat these (he did, but even if he didn’t, he ate his weight in sweet potato fries, anyway). Feel free to increase the amount if you want more spice.

Finely dice the remaining red pepper. In a bowl, lightly mash the remaining can of black beans (not completely, just enough to smash each one). Add the diced red pepper, onion, and the mixture from the food processor.  Season to taste with salt and pepper (I used about 3/4 tsp. salt).

Stir in the cornmeal/breadcrumbs a little at a time, and mix lightly until the mixture firms up. It doesn’t have to be super firm, but enough that you can pick up a piece and roll it into a ball in your hands. Place the mixture in the fridge for 30 minutes or longer.

Form the mixture into patties.

Heat a nonstick skillet with a little canola oil over medium heat. Add the patties in batches and cook until done, flipping halfway through (about 5-6 minutes total for small patties and 8-12 minutes total for bigger burgers).

Heat a pan over medium-high heat and add the canola oil. Stir in the corn, and let it sit for about 1-2 minutes before stirring. Continue to saute until lightly browned.

Stir in the garlic and jalapeno, just until fragrant – about 30-60 seconds. Place the mixture in a bowl.

To the bowl, add the tomato, lime juice, cilantro/parsley, and salt and pepper to taste.

Puree all ingredients in a food processor until smooth.