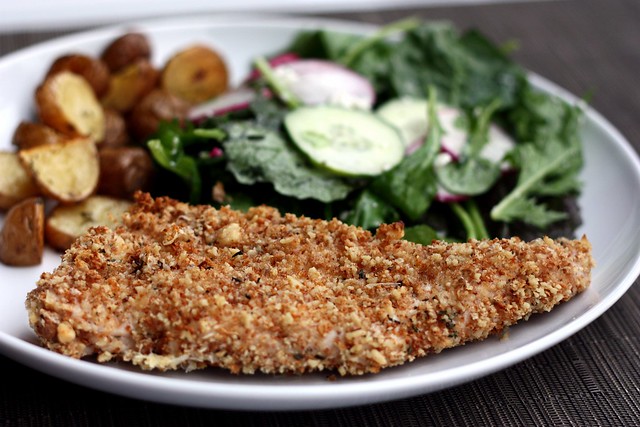 I think if you grew up in the ’80s-’90s, the words “Shake N Bake” (and not just in reference to Talladega Nights) had to be a part of your vocabulary. Admittedly, we had shake-n-bake-chicken here and there when I was a kid, and now I feel like a total sucker. Not because we were eating processed food (not the best, but you know, it was the ’80s-’90s and that’s what people did), but because they were essentially selling us breadcrumbs for twice the price.  Damn  you, Kraft! It’s almost as bad as that KFC commercial that tries to tell you that frying your own chicken will cost you, like, a hundred dollars to do at home.

At any rate, I really enjoy trying different coatings for chicken, and I’ve found that nuts make one of the best. They add a great toasty flavor and a crunchy crust that would be difficult to achieve without at least a quick pan-fry before finishing off in the oven. This chicken also utilizes toasted panko to further the crispiness, and a great combo of rosemary and Dijon for flavor.

Remember my crazy trip to the Asian grocery store? One of the best finds there was whole wheat panko! This seemed to be quite the elusive ingredient, but apparently it does exist. I should have stocked up.

I didn’t have buttermilk and I used the only lemon I had to make a light dressing for our side salad, so I ended up using a combo of milk and lowfat sour cream to dip the chicken in. The recipe just calls for a quick soak, but it certainly wouldn’t hurt to marinate these ahead of time, if you want one less step to do later on. Either way, it’s a very quick recipe that can easily be made and enjoyed on a weekday.

Here’s a quick tip, too. We had this with roasted potatoes and I started roasting those on one half of a large baking pan, as I was preparing the chicken. When I had the chicken dredged and on the rack, I added the rack (carefully, of course) to the other half of the baking dish. This way everything was done all at once and I didn’t have to wash a second pan.

Combine the buttermilk and Dijon in a shallow bowl. Add chicken to buttermilk mixture, turning to coat (this can be prepared ahead and refrigerated for several hours).

Heat a small skillet over medium-high heat, and add the panko. Cook 3 minutes, or until golden, stirring or shaking the pan frequently.

Combine toasted panko, nuts, cheese, rosemary, salt, and pepper in a shallow bowl. Remove the chicken from the buttermilk mixture and dredge into panko mixture.

Arrange the chicken on the wire rack. Spray the tops with more cooking oil. Bake for about 13 minutes, or until cooked through. 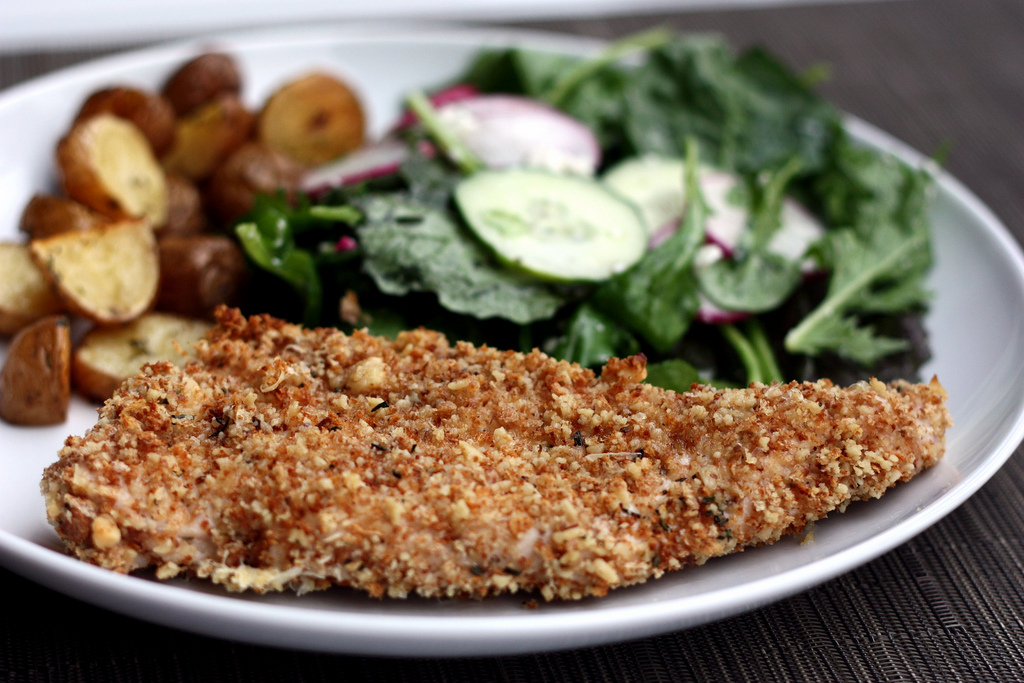