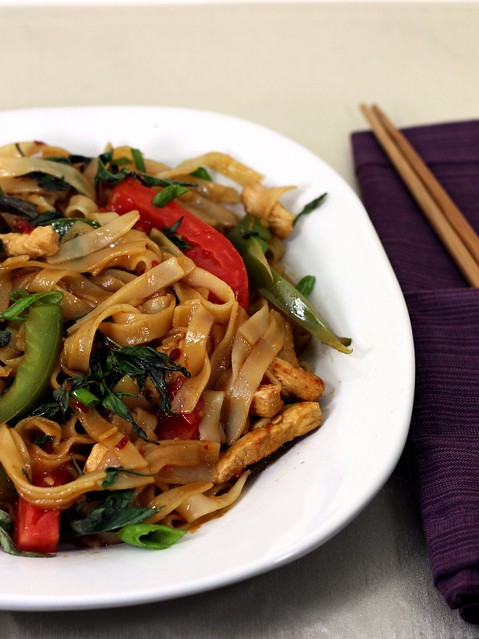 You know how, when you’re discussing lunch or dinner with a family member, friend, coworker, or even an acquaintance, and you ask, “What do you want for dinner?” and any one of those people inevitably reply “Thai!”?

Yeah, well, I’m not one of those people.

Much (much) to my husband’s disappointment, I’ve really just never been a fan of Thai food. The reasons are pretty simple and include the fact that that I’m not crazy about peanut sauces, I don’t like cilantro, and I’m hesitant about coconut milk in savory food. And when you take away those three things, that leaves you with…well, not Thai.

I’ve been trying it here and there in an attempt to acquire a taste for it (and to appease Tom occasionally) but it’s just not my thing. Recently, when I was sick of all the places near my (old) job to eat lunch, I bit the bullet and tried Thai again.

As you’d imagine, my eyes instantly gravitate toward any dish that has a picture of one of those little peppers beside it. My gaze fell upon drunken noodles. A quick description mentioned nothing of cilantro or peanut sauce, so I went ahead and got carry out.

(Just so you know, there’s  nothing “drunken” about these. They get their name because they are so spicy you need to drink a lot of water.)

Considering this post, it’s pretty obvious I liked them quite a bit. Eventually, I set out to make my own. It was QUITE the ordeal, let me tell you. This recipe calls for black soy sauce and Golden Mountain seasoning, both of which had me hanging a “huh?” bubble above my head. After reading the reviews, though, it was obvious regular soy sauce was not going to be a suitable sub.

I checked my local ethnic market, which carries tons of international specialties, and was surprised they didn’t have either. I checked another market and no dice.  Have I mentioned I’m unemployed now? I don’t think so. In any case, what’s an unemployed person to do on a Wednesday besides hop around town in search of random Asian ingredients?

Of course I missed the bus and decided to take the train. The train took forever to come, was moving at a snail’s pace, and—because it took forever to come and was moving at a snail’s pace—had to run “express” to a station farther than where I was going, so I had to get off and wait for another train to come. After wandering aimlessly around the Asian market trying to figure out if I was getting the right stuff, I missed yet another bus and had to wait 20 minutes for the next one.

It took me nearly 2.5 hours to acquire special soy sauce and Golden Mountain seasoning. I was going to be pretty pissed if this dish didn’t turn out.

(Did I mention that I completely forgot to look for Thai chilies so that, in the end, I STILL ended up substituting something? Yep. Thank goodness for the ever-present jar of Sambal Oelek in the fridge.)

Thankfully, it did turn out. PHEW. And now I have all the ingredients to make it again and again, and I even officially have a standby dish to order the next time my husband insists on Thai.

This dish is spicy, yes. But, the soy sauce and golden mountain seasoning are both sweet, and of course so are the basil leaves, all which balance out the heat. You could, of course, decrease the chili peppers or chili paste to your liking.

Meanwhile, heat oil in heavy large pot over medium-high heat. Add garlic and sauté 30 seconds. Add bell pepper and chicken andd sauté until chicken is about halfway cooked, about 2 minutes. Whisk the fish sauce, black soy sauce, Golden Mountain seasoning, and Sambal Oelek together in a small bowl. Add to the chicken mixture and cook until chicken is done.