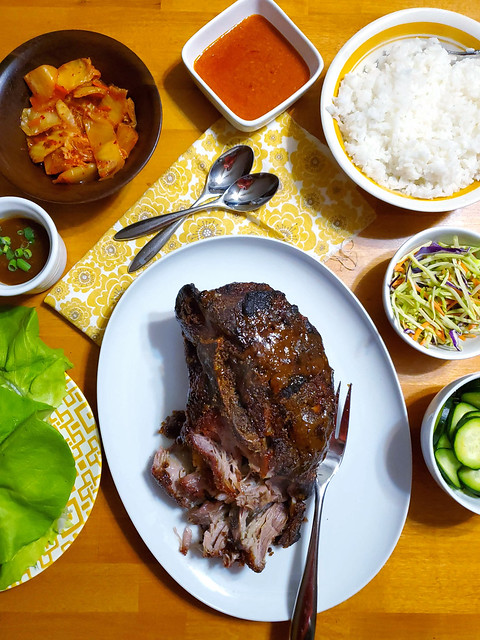 We were lucky enough to eat at a couple David Chang establishments when we went to NYC a while back (remember traveling? And eating inside restaurants? That was nice.). In fact, I’m still trying to find a recipe for some broccoli salad with miso mayo my husband is still talking about years later (David, hmu). But, I did not have *thee* Momofoku bo ssäm. Actually, I had not had bo ssäm anywhere. So, obviously, this is the best bo ssam I’ve ever had.

I used a much smaller pork roast than this recipe called for (I wish I was serving a crowd but, again, covid) and, uh, we ate a lot of it. We all absolutely loved it. The pork was super tender, but that caramely-crispy crust? Ohhh yeah. We were fighting over the “outside” pieces. As a result of the smaller roast, I cut  everything roughly in half, but I’m putting the full recipe below in anticipation of the return of safe small gatherings.

One thought on “Momofuku Bo Ssäm”