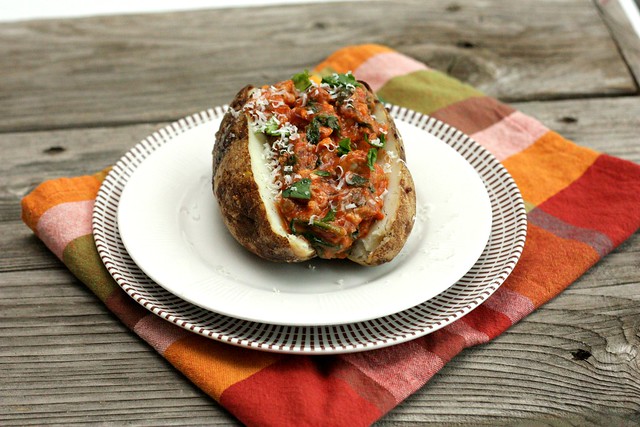 I’ll admit that I’ve never been a loaded-baked-potato-for-dinner kinda gal. When someone would tell me that was his or her dinner, I’d just be like that and…what else? It just never sounded like something that could fill me up, no matter how “loaded.” Plus, stuff! I like to eat different stuff, and so do my kids. If we’re only having two things for dinner (say pasta and salad) my kids are VERY adamant about the “missing” third thing, even if the pasta includes a protein. It appears the classic meat/starch/veg dinner is ingrained in all of our minds.

That all changed when we first ate these sausage-stuffed potatoes. Yes, though they do have spinach, we still pair them with a vegetable or a salad so they aren’t the only thing we eat. But man, are they both tasty and filling. Just think of a creamy sausage sauce (made creamy with mascarpone, *drool*) that you spoon over a baked potato instead of over pasta. Use chicken or turkey sausage (which we usually do) and these are also fairly healthy. I was hesitant about leftovers, but those are great, too.

The sausage sauce comes together in no time but obviously it takes a while to cook a baked potato. What I usually do if I’m making this on a weeknight is bake the potatoes the day before and then reheat them in a 400º oven the following day while I’m making the sausage filling (I often need to pop them in the microwave for a minute before doing this, just to make sure the inside gets hot in that time). These have become a family favorite and, despite their still-confusing dislike of mashed potatoes, my kids love these baked potatoes.

Adapted from Weeknights with Giada via Pink Parsley

One thought on “Creamy Sausage and Spinach-Stuffed Baked Potatoes”