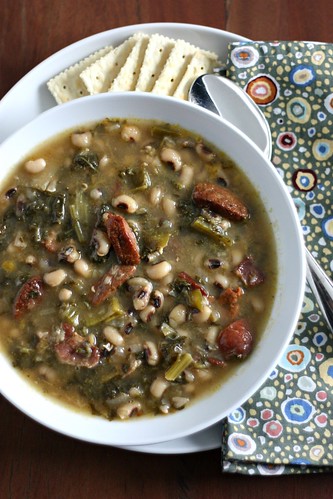 Hi! I hope you’ve all been enjoying the holidays. We had a really wonderful Christmas at home this year and, as an added bonus, our holiday travel is pretty spread out. We’re going to do Christmas with Tom’s side on new year’s eve and we won’t be doing it with mine until mid-January. Usually, even the years we have Christmas at home are not exactly relaxing because there’s packing, etc. to do for leaving the very next morning. We’ve all been enjoying the time off!

I know that a lot of people like to eat black-eyed peas on new year’s day for good luck, and with 2016 just around the corner, what better time to post this fantastic stew? Black-eyed peas are something none of us ate much of until pretty recently. No real reason other than not thinking about them and just a general lack of meals I’ve saved that include them. Or maybe because I got so homicidal hearing Black Eyed Peas’ “I Gotta Feeling” so many times that I decided to ban anything with the words black-eyed peas from our home. Maybe.

Anyway, they’re good. The kids like them, as they seem to enjoy any sort of bean/legume, and they’ve been a nice change of pace from the other beans we eat more frequently. And this stew is hard not to like. My oldest kid, who has been having some issues with spice lately, did think this was a bit too spicy. He put it aside and I thought he was done, but then he went back to it and ate it in its entirety, so I guess it was too good for him not to keep eating. My youngest had no problems and loved it, and the adults were fans as well.

The first night, I completely forgot to add the cider vinegar to this, so I’ve been adding a bit to my bowl before warming it up, and it definitely adds just a slight tang and depth of flavor. This recipe claims to serve 4-6 but unless you are serving giants, I’m pretty confident you’ll get more than that. Thankfully, the leftovers are just as good if not better, and I have no doubts it would freeze wonderfully, too.

Heat a large stockpot or Dutch oven over medium heat, and then add oil. Once hot, stir in the andouille and bacon. Cook, stirring occasionally, until lightly browned on all sides, about 10-12 minutes. Stir in the leek, onion, green pepper, celery, jalapeño, crushed red pepper, garlic, bay leaves, and a pinch of salt.  Cook until softened, scraping up any browned bits from the bottom as you stir.

Add the kale and cover the pot; cook until it starts to wilt, a few minutes. Remove the lid and continue cooking until kale has totally wilted, 3-5 more minutes.

Add the chicken stock and black-eyed peas, as well as enough water to completely cover peas if necessary. Bring to a boil and then reduce heat to low, cover, and cook until beans are tender, about 1 hour. Stir in the vinegar and season to taste with salt and pepper.

One thought on “Black-Eyed Pea Stew with Kale and Andouille”