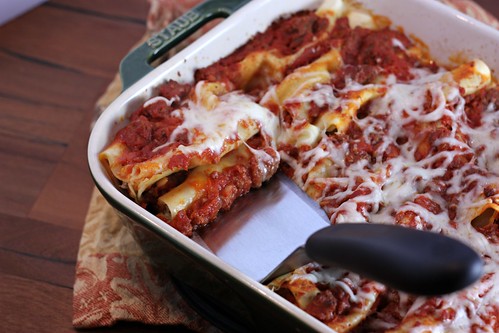 This conversation happens pretty much weekly in my house:

Me (to Tom): Anything in particular you want to eat next week?
Tom: Hmm, not really.
Me:  Well, can you give me some ideas? I don’t want to do this on my own again.
Tom: I’ll try to think of some.

Tom starts doing work/falls asleep/plays video games while I begrudgingly finish making both a menu and a grocery list, which have become the bane of my existence as of late.

So, yeah. BUT! Recently I asked this, expecting things to go as they normally do, and he suggested meaty manicotti. I was surprised both at the suggestion at and the specificity of his request. This dish is one our family really likes, and since I needed a Sunday meal, it was the perfect idea.

This is kind of your standard pasta-with-meatsauce dish, but there is a secret ingredient to make the “meaty” in its moniker even more so – pepperoni. The flavor is a background one, adding more saltiness and just a liiiittle bit of spice the mixture, but it works so well. Also, there is a lot of cheese. Boatloads of cheese. Pantsloads of cheese.  I reduced the amount and probably could have reduced it a bit further. Even lessened, we’re talking over 2 lbs. of cheese. I was able to make more than 16 manicotti, so after eating it for dinner and having a couple days’ worth of leftovers, we were still able to freeze some. I guess the good news is that cheese goes a long way.

Let me just get out of the way that I think cannelloni is a better descriptor for this than manicotti (I just know a full-blooded Italian is going to send me a ragey email or something, hah). Don’t shoot the messenger! Take it up with ATK if you have a problem. 😉 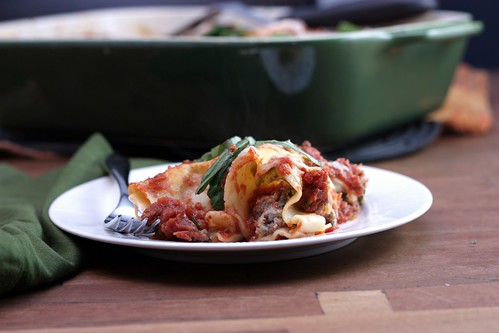 To make the sauce: Pulse the onion and pepperoni in a food processor until coarsely ground. Add the beef and pulse until thoroughly combined. Transfer to a large deep saute pan over medium heat (if you’re using very lean ground beef, you may want to add a little oil beforehand) and cook, breaking up the meat, until no longer pink. Use a slotted spoon to transfer 1 cup of the mixture to a paper-towel lined plate; reserve.

To the pan, add the tomato paste, garlic, and crushed red pepper, stirring until fragrant (about a minute). Stir in the tomatoes and simmer until sauce is thickened, about 20 minutes. Season to taste with salt and pepper.

Preheat the oven to 375 degrees.

To make the filling and noodles: combine the ricotta, all but half cup of the mozzarella, all but 1/2 cup of the provolone, egg, basil, salt, pepper, and the reserved 1 cup of the meat mixture in a bowl.

Meanwhile, pour boiling water about halfway up a 13×9 baking dish. Slip the noodles into the water one at a time and let them soak until pliable, about 5 minutes (separate with a butter knife to prevent sticking). Remove the noodles from water and place in a single layer on a clean kitchen towel. Discard water and dry baking dish.

To assemble: spread half the sauce across the bottom of the baking dish. Spread about 1/4 cup of the ricotta mixture over the bottom half of each noodle. Roll the noodles up around the filling and lay them seam side down in the baking fish. Spoon remaining sauce over top of pasta.

Cover the dish tightly with foil and bake until bubbling around the edges, about 40 minutes. remove the foil, sprinkle with remaining 1/2 cup mozzarella and 1/2 cup provolone and continue to bake until cheese is melted, about 5 minutes. Cool for about 10 minutes before serving.