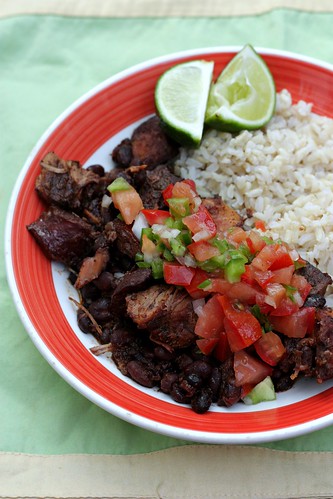 Moving to the suburbs is when needing slow cooker meals the most became paired with the unfortunate inability to actually utilize most slow cooker meals. See, we’re out of the house for a long time, which doesn’t work with a lot of crockpot recipes. And I have little to no time in the morning to be prepping anything (never mind that I’ve never been a fan of smelling like a restaurant upon my arrival to work).

This recipe is pretty perfect for people like us, though. The prep can be done the night before and the cook time is long. You don’t need to sear the meat (although, by all means, if you want to, go ahead and do it in the bacon fat), so in the morning you really just need to piece everything together. You could probably assemble the whole thing and just stick the insert in the fridge overnight but I will admit I haven’t tried that yet.  Instead, what I do is make the bacon/onion/broth mixture and put that in the insert. I also cut up the roast and kielbasa. The next day all I need to do is stir in the beans (which don’t even need to soak overnight) and meat. Even a mom looking for one kid’s missing shoe while the other kid is yelling because he had to be the second to get his teeth brushed can pull it together.

Although most people eat stew in the cooler months, I thought this one worked pretty well even when it was warmer out. It’s a good summer/fall straddler recipe, especially since tomatoes are still good (and the peppers we’d given up on in our garden have literally just started to grow). I think just adding the simple “hot sauce” (which is really more of a relish) to the top brightens this meal  up a lot and makes it feel a little less heavy. We’re all big fans of this recipe, which is good because it makes a ton. 🙂 I always freeze much of it (after leaving some for lunch leftovers the next day) and it holds up well.

Cook the bacon in a large skillet over medium-high heat until crisp. Stir in the onions, tomato paste, garlic, chili powder, cumin, and coriander. Cook until onions are softened, about 8 minutes. Stir in the water and scrape up any browned bits. Transfer to the slow cooker.

Stir the broth, beans, kielbasa, and bay leaves into the slow cooker. Season the pork with salt and pepper and nestle in. Cover and cook on low for 9-11 hours (or on high for 5-7 hours), until pork is tender and beans are cooked.

Let the stew settle for 5 minutes before skimming fat from the surface with a large spoon. Remove and discard bay leaves. Season the stew with salt and pepper to taste (you can also add some hot chicken broth to the stew if you feel it needs it).

Make the hot sauce by combining all the ingredients in a bowl and lightly mixing. Let stand at room temperature for 30 minutes, if you  have the time (sauce can also be made up to 3 days prior and refrigerated). Serve the Brazilian hot sauce with the stew.