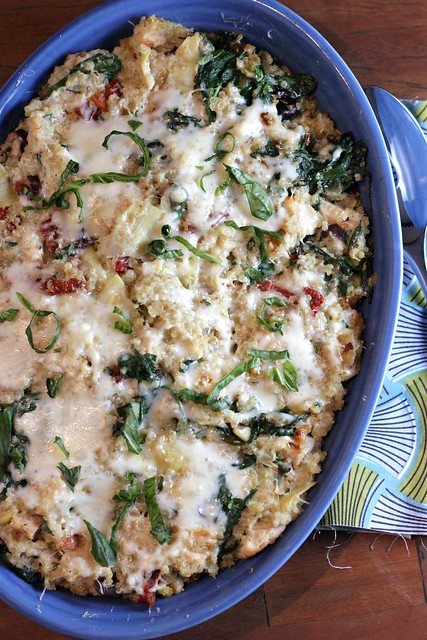 My mom likes to give people things. Every time I visit, I somehow manage to get sent home with a box of my childhood stuff, random books, a sponsored tee, a trinket, you name it. One time she tried sending us home with one of those enormous 6′ foot tall Costco stuffed bears until we told her she was insane and we would not be adding what was basically another person to the two bedroom condo we had at the time.

So, it was not at all surprising that when she came to visit us a while back, she brought bulk-sized amounts of quinoa and artichoke hearts. We’re still making our way through the quinoa because, whoa, it’s a lot of quinoa.

I’m not all that crazy about quinoa plain, unless it’s serving as a bed for a burrito bowl or something, but I’m all about it when it’s used in casserole fashion or when it’s cheesy/creamy. This has both of those things going for it and makes good leftovers (I sometimes struggle to have non-pasta leftovers), too.

I ended up adding chicken to this but obviously you don’t need to. It was just a good way to up the protein and increase the servings. Plus, I knew it would go over well with the kids. Quinoa sometimes goes over like a lead balloon with Zachary (to Ian it resembles most carbs, which indicates to him that it is delicious and worth of being shoveled into his mouth). With Z, it really depends on the day, his mood, or which way the wind blows. He did really like this dish, though, which I attribute not only to the chicken but to the copious amounts of cheese and sun-dried tomatoes and olives, both of which he adores. 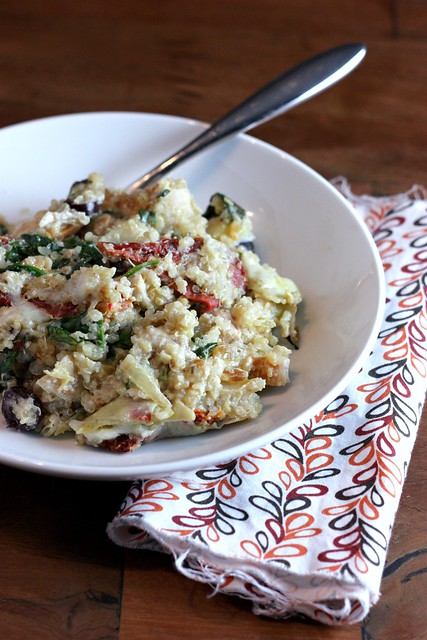 Place the rinsed quinoa and water in a small saucepan. Bring to a boil and then cover, reduce to a simmer, and cook until done, about 20 minutes.

Meanwhile, heat the olive oil in a deep skillet. Add the onion and a pinch of salt, and cook until tender, about 6 minutes. Stir in the garlic, crushed red pepper, and oregano and cook for another minute, until fragrant. Stir in the kale and spinach, sauteing until wilted. Place in a large bowl.

Make the cheese mixture by whisking together the ricotta, half and half/milk, Parmesan, and half of the Mozzarella. Add freshly ground pepper to taste.

To the bowl with the onion mixture, add the cooked quinoa, sun-dried tomatoes, artichoke hearts, olives, chicken (if using) and half the basil. Fold in the cheese mixture and salt to taste. Pour the mixture into a 2 quart baking dish and cover tightly with foil. Bake for  20 minutes and then remove the foil, sprinkle on the remaining Mozzarella, and bake until cheese is melted, 5 minutes longer.

Allow to rest for 5-10 minutes once out of the oven. Top with remaining basil before serving.