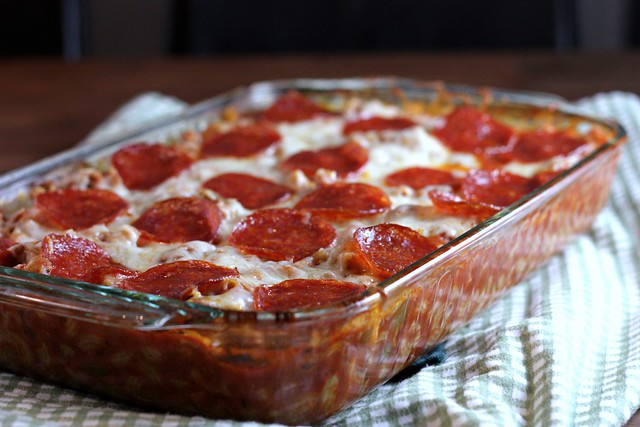 My youngest son will not eat cheese unless it’s stuck to pizza or pasta. If I hadn’t seen the child come out of my own body, I may question whether he’s mine (did I mention he particularly dislikes feta and despises yogurt?). But man, oh man does that kid love pizza and pasta. Literally every day after he gets picked up from school he asks if we’re having pasta. When that answer is (almost always) a no, he asks if we’re having pizza or bread. If they are all “nos,” temporary hell will ensue. When it comes to eating dinner, he’s basically a garbage disposal no matter what, but he has the typical toddler gene that gives preferential treatment to carbs. (He must be mine after all.)

Obviously, I knew this meal would be a hit. It’s a fairly standard baked pasta dish with a pizza twist. Typical pizza ingredients like sausage, pepperoni, and mushrooms (I also added green peppers) are added to a tomato sauce that really is reminiscent of pizza sauce – also, I swear it smells like pizza while it’s cooking. 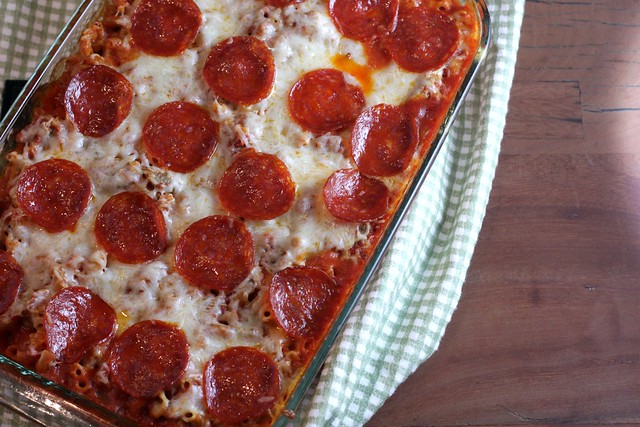 This is extremely easy to throw together. The pasta cooks in the oven, so there’s no cooking it beforehand. The mushrooms are microwaved to get rid of their moisture, and the sausage is crumbled into the baking dish without even being browned. I was a little leery of that last thing, knowing that browning sausage can add more flavor and uncooked sausage does not look particularly appealing in globs on top of uncooked pasta. But, it turned out fabulously and, hey, if you’re familiar with how Lou’s makes their pizza, which is to put a literal layer of pressed in, uncooked sausage onto the crust before baking, it may make this even more “pizza-like” in your mind. 🙂 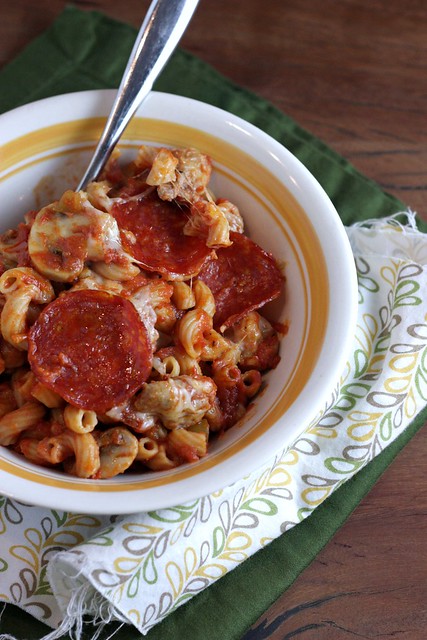 One thought on “Pizza Pasta Bake”