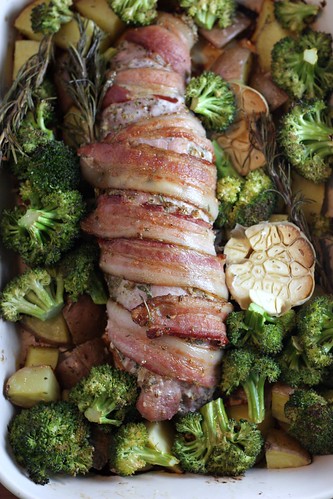 I know the bacon craze is dying/has died out but the truth is bacon is timeless. I mean, any time you wrap something in bacon, it’s going to be good, regardless of whether it’s the hip thing to do or not, right? Right. I’ve combined pork tenderloin with bacon quite a few times (what Z referred to this past weekend as “double pork!”), so it’s no surprise that when I saw this recipe, it immediately grabbed my interest and got made pretty quickly.

What I love about pork tenderloin, or really any roasted meat, is that it’s so easy to just cook alongside potatoes and/or vegetables for a complete meal.  After you put it in the oven, your work is done. It’s rare I roast pork tenderloin without searing it first and, since that increased the cooking time, I decided to do larger cut redskins rather than sweet potatoes or fingerlings, which seem to cook a little more quickly. About 10 minutes before the pork was done I threw in some broccoli. Once the pork came to the correct temperature, I removed it and let the broccoli and potatoes continue cooking for about 10 minutes while I rested and sliced the pork.

Although not required, I do think this benefits from applying the rub in the morning/afternoon and letting the pork tenderloin absorb the flavors more prior to cooking. We made this on a weekend (take that, recipe title!) so doing so in the afternoon was not a problem, but the rub is pretty quick to put together so  you should be able to do it in the morning before work if you’d like. 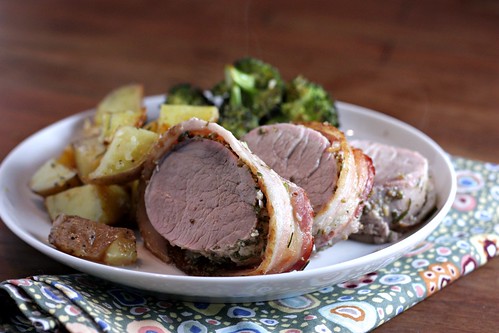 Make a paste using the minced garlic, chopped rosemary, chopped fennel seeds, salt, pepper, and 1 tablespoon of the oil. Rub the mixture all over the pork tenderloin. If you can, refrigerate the pork for several hours before hand. If not, preheat the oven to 425.

Wrap the pork tenderloin in the bacon, keeping the ends of the bacon strips on the bottom and place in a roasting dish. Nestle the head of garlic and rosemary sprigs around the pork, and drizzle with the remaining 1 tablespoon of oil. Roast until a thermometer registers the internal temperature of the highest part at 140, about 35-40 minutes. Transfer to a cutting board and let rest for about 10 minutes before slicing.

Note: If you are adding potatoes or vegetables to this, you will need a little more oil. I tossed the potatoes in about a tablespoon of oil, nestled the pork on top, and then drizzled the pork/garlic with about 2 tsp. Before adding the broccoli, about 25 minutes into cooking, I tossed it with a little lemon juice and another 1-2 tsp. oil.