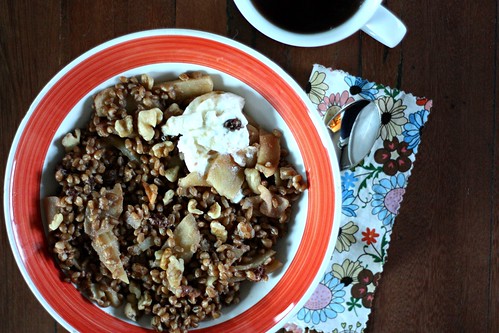 In 2014 I took over 5 weeks of paid time off. At first mention, that might sound pretty lucky and wonderful, until I tell you that almost none of it was planned or desired. Tom and I took 2 days off to go to NYC. Other than that I literally had 6 hours of personal time all year. The rest was spent largely with a sick toddler.

During Christmas break, we visited my family in Michigan and we visited my in-laws a couple hours south of us. I love seeing our families but travel can be brutal, especially when that same toddler sleeps terribly outside of his own crib. I really enjoyed spending so much time with my kids, husband, and our families while being off work. But by the week after Christmas I was…well, sort of peopled out. And I missed drinking a cup of coffee while it was still hot.

My work was still closed, and the kids’ school wasn’t, so I did what most working moms wish for and most others give you grief for and I sent them in. And I took time alllllll to myself. I did…almost nothing. I played on the internet, read at Starbucks, and cooked. And yes, I did things like organize some papers, laundry, and play Tetris with our playroom storage/new toys (I lost). But it was without distraction.

Anyway, one thing I made it a point to do that morning (besides drink hot coffee) was to have something different for breakfast. Breakfast is important to me, so I never skip it, but I’m also never creative with it. I wanted something warm and filling and different. And this fit the bill perfectly. On top of all those things, it’s healthy, too.

Though I made this on a day I had extra time in the morning, there’s no reason you can’t make this on any old day with a little prep. I cooked the wheat berries the night before and then sauteed the apples and mixed everything in the morning. It didn’t take long, but if you want something even faster I honestly don’t know why this couldn’t be made in its entirety and then just heated briefly in the microwave the next morning. When I make baked oatmeal, I add just a splash or two of milk before reheating, and I would do the same here (before adding toppings). 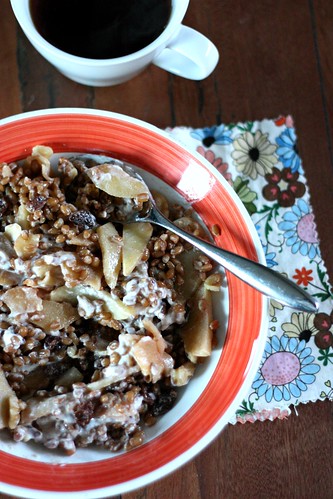 Place the wheatberries in a stockpot with a few quarts of water and bring to a boil. Turn to a simmer and cook, covered, until plump and soft (it will still have a little bite to it), about 50 minutes. Drain. (You can do this the night before and refrigerate.)

Place the apples in a shallow saucepan with about 2 tablespoons of water (you can use butter if you’d like, but I figured I’d save the calories). Add the cinnamon and cloves and cook the apples, stirring occasionally, until soft. Add the milk, raisins, extract, and the cooked wheatberries. Simmer until nearly all the milk mixture has been absorbed.

Spoon the wheatberries into individual bowls and top with a drizzle of maple syrup or honey, a dollop of yogurt, and nuts.