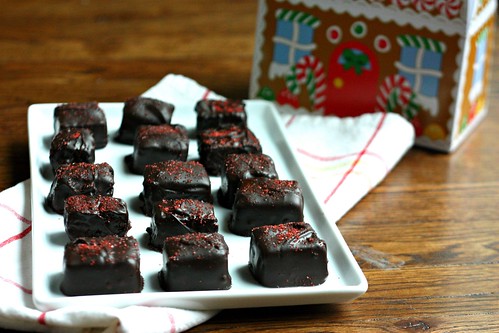 I meant to post this before the holidays because it’s a really great and easy treat to make and gift to family and friends but, well, stuff (travelingchristmassickkidsbrokenlensesshoppingwork) got in the way. But fear not! Although these were lovely little bites to make for the holidays, they would be equally lovely at your new year’s eve party, perhaps sprinkled with a little silver or gold decorating sugar. Or for your coworkers. Or for yourself, every time you pass the kitchen.

This isn’t much of a “recipe” but it’s an idea for treats that’s pretty easy and seems to be very well-liked by everyone. I mean, how can you not like chocolate dipped in chocolate? You just make a pan of brownies, chill them for a couple hours in the fridge before slicing them, and then dip in melted chocolate. After you’re done you can sprinkle them with decorating sugar or even decorate them with icing. I think these would be adorable with icing used to make bows (like little gift boxes) but I didn’t have the time or the energy.

I was originally going to make these with my favorite brownie recipe, but I ended up just using the Hershey recipe (which is good in its own right) instead. One factor was cost (not having to buy more chocolate and just using cocoa powder, which I already had) and the other was richness. The MS brownies are much fudgier and richer than the Hershey’s (a big reason they are my favorite!) but I figured since they would be dipped in chocolate, I didn’t want them too be TOO rich (a term that honestly has not entered my vocabulary but apparently some people do feel this way and since these were for giving away… :))

Make your brownie recipe as described, in an 8″ square pan lined with parchment or foil. Cover and chill in the fridge for 2 hours.

Remove the brownies  from their pan using the parchment/foil and cut into little squares (I found 7×7 to work best).

Dip the brownie squares one at a time into the melted chocolate. I use a fork to basically cover the bites with chocolate (sort of like “splashing” them with the chocolate, tap the fork onto the side of the bowl to remove any excess chocolate, and then slide them onto the parchment-lined baking sheet with a butter knife.  Continue until all squares are dipped.

Let the squares sit for a bit until not yet set before sprinkling with decorating sugar. If using icing to decorate, wait until the squares have completely set. You can set them on the counter or in the fridge, which will take less time.

Note: I used a basic Hershey brownie recipe (this one, minus coconut), which was great with the chocolate and not too “over the top.” Also more cost effective than my true favorite brownie recipes.