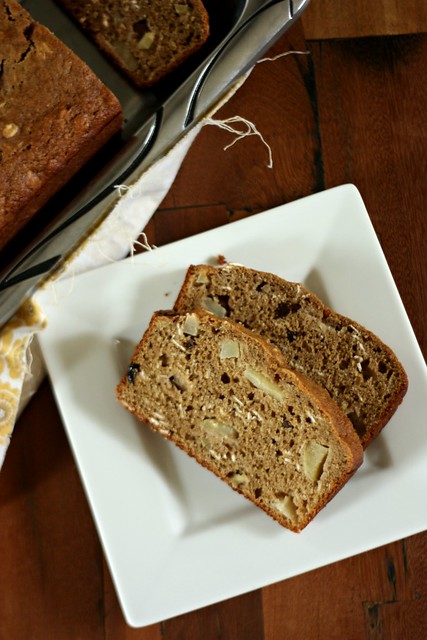 We recently had a family trip to the apple orchard. As expected, eating the apples was far superior to picking them, as far as the kids were concerned. But, we did end up with well over 10 lbs. of apples. The following day, Zachary and I decided to make some apple bread to make a teeny tiny dent in our stash. Z has always loved to bake and cook with me, but with cooking becoming more for survival and less for pleasure lately, we haven’t been in the kitchen much together. It’s been nice the past few weekends to bake with him again. I’m sure Ian will want to get in on the action pretty soon, too.

I always try to keep muffins and quickbreads pretty healthy. I was originally just going to adapt one of the many healthy muffin recipes I’ve made in the past, but then I came across this one on the KAF site and it sounded perfect. To make it even better for us, I used all white whole wheat flour, reduced the sugar, and replaced some of the oil with more applesauce. The result was an incredibly moist bread bursting with apples and fall spices, and made a great part of each of our breakfasts for a few days.

The original recipe doesn’t call for apples or raisins but does call for walnuts. Although this bread would be pretty fab with walnuts, we omitted them so that the kids could take some to their nut-free-school for breakfast. I also decided against adding almond extract for that same reason, but I think replacing some of the vanilla extract with almond would be awesome. Then again, I’m fairly certain I could just drink an entire bottle of almond extract, so I may not be the best judge of that. 🙂

In a large bowl, mix the sugars, egg, oil, applesauce, and vanilla together. In a separate bowl, whisk together the flour, baking powder, baking soda, spices, and salt. Add the dry ingredients to the wet ingredients, stirring just until combined. Fold in the oats, apple, and raisins.

Pour the  mixture into the prepared loaf pan and smooth the top. Bake for 40-55 minutes, until a toothpick inserted comes out clean.