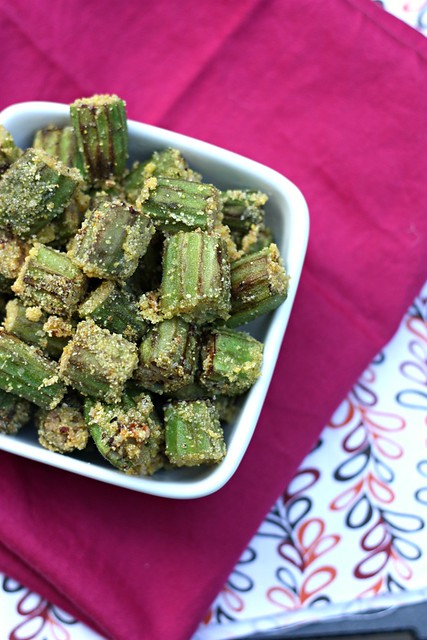 I am fortunate to live with some of the least picky eaters on the planet. The few things the boys don’t like to eat are very strange (mashed potatoes for Zachary, yogurt for Ian?!?), but between the two of them and Tom, I never have to really wonder if a meal will be well-received when planning or cooking it. (And it’s a good thing, too, because I’ve gotten to really dislike the planning and grocery-list-making process, so if I had to deal with pickiness, too, I would be so done.)

All that said, Tom is (historically) not a big fan of okra. On his short list of exactly three things he doesn’t really care for, okra falls second. Number one is Grape Nuts cereal, which he almost seems offended by. Number three is eggplant, where he has similar feelings to my own, which is basically that it’s not bad and we have both been coming around to it in recent years, but we don’t get excited about it, either.

I’m sure when okra appeared on the grocery list the first time I made this, Tom was less than excited. But after he had this version? He came around. He told me if I wanted to make okra like this all the time, he would be fine with it. Zachary also fell in love with it and, so, that is the way we continued to make it 99% of the time. Aaaaand I recently discovered that Ian, too, is a fan of this. So, it looks like this will be the way we continue to make okra 99% of the time for the foreseeable future (the other 1% being devoted to roasting and salads, and the occasional stewed pot I will make for myself, thankyouverymuch).

I made this recipe as-is the first couple of times, but recently I started cutting down the oil a bit and it works just as well. I left a range in the recipe I’m posting, but I use the low end of the range.  This isn’t going to replace fried okra or anything, but it does give you a crispy, non-slimy version of okra that even self-proclaimed okra haters can’t hate on.

Adapted from Bon Appetit, Y'all via Pink Parsley