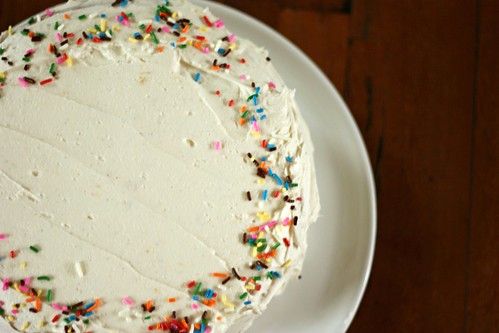 Mom guilt is awful. And I’m not even talking about the “mommy wars” stuff like breastfeeding or formula feeding, sleep training or not, discipline, and a host of other things. I’m talking about the guilt you inflict upon yourself as a mom that can make you feel both awful and awfully ridiculous. When I first learned I was pregnant with Ian, I basically freaked out. It’s not because it was a surprise or anything like that, but I was so worried about bringing a new person who needed our attention into the world of a near-3-year-old who’d had us all to himself for as long. And then when I realized my due date was a mere 10 days from the due date I had when I was pregnant with Zachary, well, then I started feeling guilt about their birthdays being so close. How could I have a third birthday party for Z with a really newly-new newborn? Would they feel slighted that they had to share parties as kids because our families are just not close enough to come twice? And would Ian look back on his first birthday picture and be mad he didn’t get his own celebration like his brother had?

The thing is, I know a lot of it is crazy. For one thing, it’s not like we even  have big parties. Also, does Ian care about his first birthday party? Of course not. He has no idea what’s going on, and all he cares about are things like eating four times as much food as you’d expect a kid in the 13th percentile to eat, climbing onto every surface, moving things from one container to another, and refusing to sleep.

Zachary got a little slighted for his party last year since Ian was less than 2 weeks old. And it wasn’t a big deal, because he couldn’t have cared less and, like I said, it’s not like we have huge parties. But I phoned it in by buying a cake (which had his name spelled incorrectly when we went to pick it up, FYI) and ordering pizza. So, because Ian has no clue what’s going on, anyway, I asked Zachary what kind of party he wanted this year. We made sure he knew he would be sharing the party with Ian, and he said that was just fine as long as there were two cakes. Well, obviously!

I was pretty happy when Zachary chose vanilla as his cake flavor. I asked him a few times, and his answer always remained vanilla cake with vanilla frosting. I like chocolate cake well enough, but I’ll choose vanilla over chocolate in almost every instance. And make it vanilla bean cake with vanilla bean frosting? Well, then there’s just no contest.

Z wanted a football party, and originally, I’d planned on attempting to make this into a Chicago Bears cake by basically stenciling the C logo in orange decorating sugar, but they were out of orange at the store and I really did not want to attempt piping, because, guys? I suck so hard at decorating cakes. SO. Sprinkles to the rescue! I did make some cookies and we had football-themed food like sliders, Italian beef, mini pretzel-wrapped hot dogs, and the like.

So, back to the cake. I was a big, big fan. Everyone liked this cake, especially Ian, who had his very own, and cried so hard when I took it away from him. If I hadn’t, though, he would have eaten an entire 6″ layer cake on his own and, well, that’s not cool. Because if anyone gets to eat an entire one of these cakes, it’s going to be me. 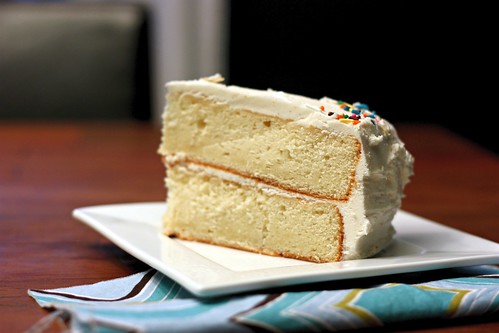 Cake adapted from Confections of a Foodie Bride

Preheat the oven to 350. Grease and line two 8″ or 9″ round pans with parchment.

In a medium bowl, sift or whisk together the cake flour, baking powder, and salt. Place the butter in the bowl of a stand mixer fitted with a paddle attachment. Split and scrape the vanilla bean into the butter and beat on medium-high for about 3 minutes, until light and creamy. Scrape down the bowl and beat for another minute.

Spoon half the batter into each prepared pan and smooth the top with a spatula. Bake in the lower third of the oven until a skewer inserted in the center comes out with moist crumbs attached, about 45 minutes. Cool completely before frosting.

Beat the butter until creamy, and then add the confectioners sugar slowly. Continue to beat until combined, scraping down the sides of the bowl if necessary.

Split and scrape the vanilla bean into the mixture, and add the vanilla extract, beating just till combined. Add a little milk at a time, continuing to beat, until frosting is the consistency you want (you may need more sugar or more milk).