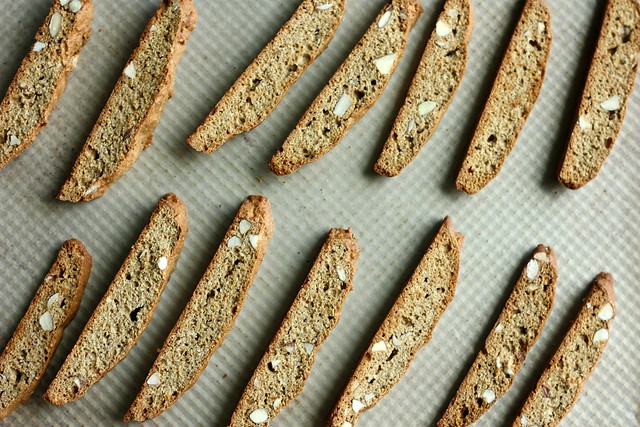 Zachary really liked these and saw them as a treat, which is great, considering they aren’t bad for you at all. Biscotti in general are largely guilt-free. Although some versions use butter, the only kind I’ve ever made use eggs for binding, and occasionally a little oil. This recipe uses all whole wheat flour, to make them even better for you, and only a small amount of brown sugar (especially when you consider how many biscotti this recipe  makes—which is a lot). They are great on their own, dunked in coffee, or eaten in the same bite as a piece of chocolate (I wouldn’t know anything about that, though). 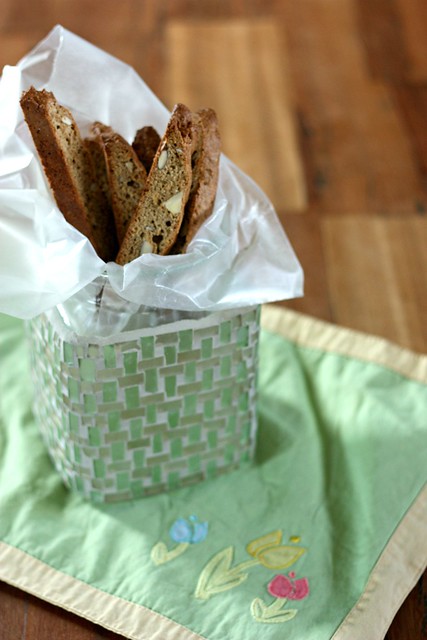 I halved the recipe because I wasn’t sure I had enough almond meal and probably didn’t need the entire batch around, anyway, but I’m posting the original recipe so I don’t have to tell you to use 1.5 eggs. 🙂 The only changes I made were to increase the almonds a bit and also to add some almond extract. If you couldn’t tell, I have juuust a small almond extract obsession. 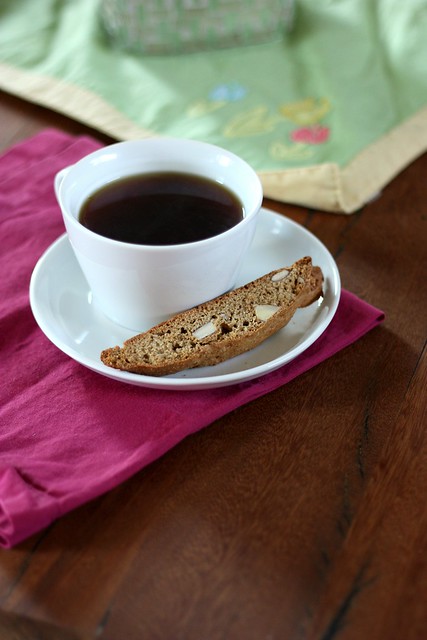 Adapted from The New  York Times

Heat the oven to 300 and line a baking sheet with parchment or a silicone liner.

In a medium bowl, whisk together the flour, almond meal, baking powder, and salt.

In a large bowl or the bowl of a stand mixer, beat the sugar and eggs until smooth, about 2 minutes. Scrape down the sides of the bowl, add the vanilla and almond extracts, and beat for an additional minute.

Add the flour mixture and beat at low speed until just incorporated. (The batter will be sticky.) Fold in the almonds.

Scrape half the batter onto the baking sheet and form into a flattened log, about 12″ by 3″. Repeat with the other half of the batter, leaving at least 2″ of space between the logs.