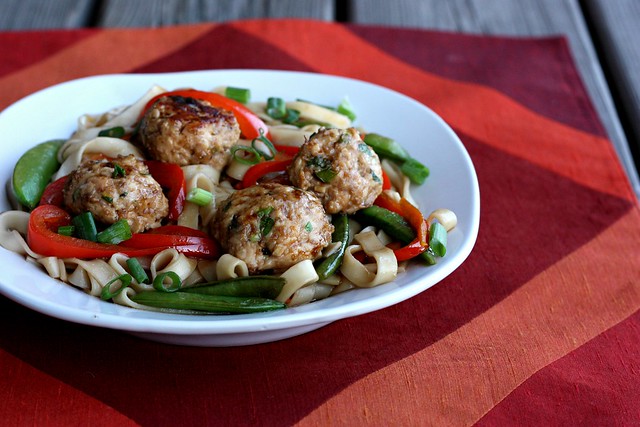 About a million years ago, I remember seeing a recipe Rachael Ray had for Chinese spaghetti and meatballs and, unlike her other meals with really weird combo titles (“stoup,” anyone?) it actually sounded pretty intriguing. Of course, I never got around to making anything like that until now because now I’m all about making pasta that does not have dairy which, let’s face it, is not easy. I looooove pasta and I love even more that it makes great leftovers. I’ve been seriously slacking on bringing my lunches lately because I feel like dinners with “the best” leftovers tend to have cheese in them (pasta and Mexican, namely). As a result, I’ve been making lo mein type dishes pretty frequently because they give me my pasta fix and reheat well, too.

I didn’t actually use Rachael’s recipe, since I had two recipes of my own I could fuse together. For the meatballs, I just used a riff on my Asian pork burger recipe and the sauce is similar to what I use in chicken lo mein (such lovely photos, both of them…). You can obviously use any vegetables you want in this. Carrots often end up in our version just because we always seem to have a bag in the fridge but I’m always partial to snap peas and peppers in Asian dishes. Really, you can’t go wrong with ginger and garlic in anything, in my personal opinion.

Preheat the oven to 400 and line or spray a baking sheet with cooking oil. Lightly mix together all of the ingredients for the meatballs, and form into about 20-25 meatballs. Place on the prepared sheet and bake until cooked through, about 12-15 minutes.

Meanwhile, cook the lo mein noodles according to the package instructions.  Whisk together the oyster sauce, soy sauce, chicken broth, cornstarch, and chili paste; set aside.

Heat the oil in a wok or skillet and cook the white parts of the green onions, peppers, snap peas, mushrooms, ginger, and garlic until peppers and snap peas are tender crisp (stagger your vegetable additions if you prefer some to be cooked more than others). Add the sauce to the wok and cook a couple minutes until it begins to thicken. Stir in the sesame oil, and then combine everything with the cooked lo mein noodles, and meatballs. Top with scallion greens.

11 thoughts on “Asian Spaghetti and Meatballs”