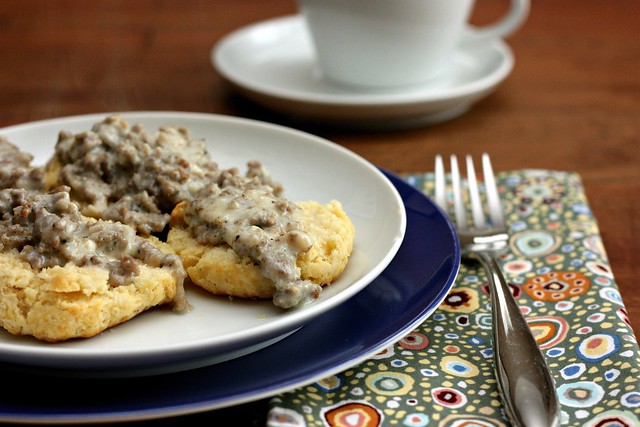 Ever since making the sausage-cheese biscuits, I’ve been craving biscuits and gravy like crazy. I’d never eaten biscuits and gravy until I was in my early-ish twenties. Tom frequently proclaimed his love for this meal, and frankly, I always thought it sounded really weird and it just didn’t appeal to me. But, after trying it once, I was hooked. Now I realize that I was weird to think it weird. I mean, what’s not to like about flaky biscuits, breakfast sausage, and gravy? Nothing.

Sausage gravy is pretty much the easiest thing to make, ever. All you do is cook bulk sausage, and then make a super quick gravy from the drippings in the pan, a little flour, and milk. That’s it. Making the biscuits is the most time consuming part and even that is pretty easy. I used a recipe for buttermilk biscuits I love and have used before* but there is no shortage of biscuit recipes out there I’ve been meaning to try, and I may try one out next time that rises a little higher.

Even though this is easy to make, it’s still a very welcome breakfast that feels special. Okay, in actuality we  had this for lunch on a weekend because it’s hard for me to get my act together first thing in the morning and my child is a food beast, who wants to eat rather quickly after waking  up. Either way, we all love this, and can’t wait to  have it again soon—for any meal of the day. 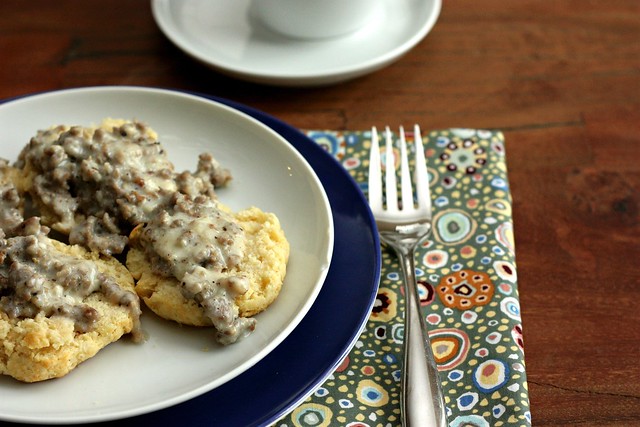 Gravy recipe from Food Network, via Cook Like a Champion

Heat a heavy-bottomed skillet (preferably cast iron) over medium-high heat. Add the sausage and break up with a wooden spoon as it cooks. Cook, stirring occasionally, until well browned and cooked through, about 7 minutes. Transfer to a plate with a slotted spoon, leaving the drippings in the pan.

Sprinkle the flour into the skillet and whisk for about 1 minute. Continue whisking while slowly adding the milk to the skillet. Bring the milk a boil, then reduce the heat and simmer for about 2 minutes, until thickened. Add salt and pepper to taste (you will need a fair amount). Add the sausage back into the gravy, and serve immediately over split biscuits.

*The recipe above makes 12 smaller biscuits, but for something like this I prefer to make 8-10.

9 thoughts on “Biscuits and Gravy”