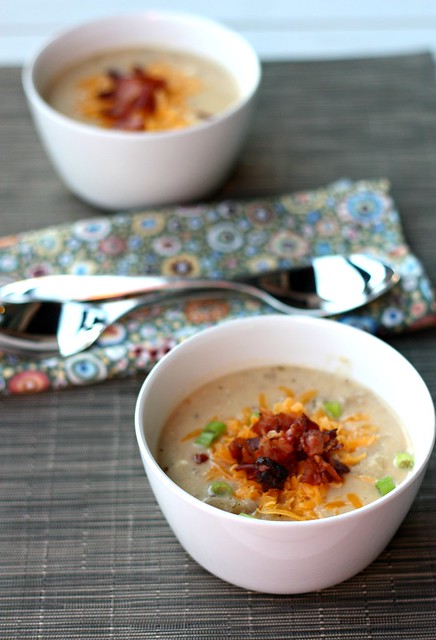 You need this potato soup in your life. Really.

First of all, potato soup? Delicious in its own right. But when you add bacon, onions that have been cooked in the bacon fat, cheese, and sour cream, it gets elevated to awesomely delicious. Add in the fact that this is a slowcooker recipe, so it’s done by the time you get home from work without much effort on your part, and you have yourself what’s sure to become a family-friendly staple.

I’m always wary of crockpot recipes, even though I’ve found several that work beautifully. One of the things people love to cook in a crockpot is soup, but I’ve found that a lot of soups or chilis I’ve tried in the crockpot have just been flops. I trust Josie, though, so when she posted this I added it to our menu for the very next week. And if you couldn’t already guess, I am so, so glad I did.

The original recipe calls for cooking this for 4-6 hours, because people who create crockpot recipes apparently do not realize that the bulk of people who actually use said recipes are probably gone for a hell of a lot longer than 4-6 hours. I cut the potato pieces slightly larger than the 1/2″ the recipe calls for (probably closer to an inch) so that they wouldn’t be total mush by the time I got home, and they weren’t. The only other changes I made to this recipe were using less cheese, mostly because I realized I only had about 6 oz. of a block left. That said, I think it was totally fine (I added about 4-5 oz. to the soup and used the rest for garnish). I also subbed half and half for the cream, since that’s what I had on hand.

I cut the onions and bacon the night before and contemplated peeling and cutting the potatoes and storing them in water, but decided to just cut them in the morning. It really wasn’t a problem to do that while the bacon and onion were cooking. The prep for this recipe is really not too bad, but the only negative (or positive, depending on how you look at it) is that if you’re wearing work clothes while getting everything ready, you’re likely to smell like bacon and onions for the rest of the day.

This soup has a wonderful texture – nice and creamy without the use of too much cream. It has a slight bacon flavor throughout, and it has just a little tang from the sour cream. This recipe fired on all cylinders, and will definitely be making a reappearance or two or five this fall and winter.