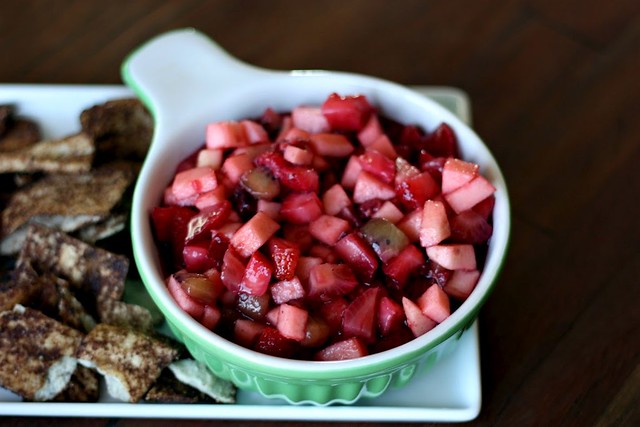 I told you I was getting pretty excited for warmer weather produce, and making this fruit salsa for Zachary’s party is yet another indication. Z surely would not complain, considering he could eat “strawbabies” all day long. Of course, you could make this with any number of different seasonal fruits and it would work just fine.

This salsa obviously requires a fair amount of chopping, but is still extremely easy to throw together. Plus, you can make it advance. I didn’t make mine too far in advance because I was worried about the texture, but I must say that we had some leftover, and it was fine the next day and day after that (though it will become a bit softer and more syrupy). Even without chips, Zachary did not have an issue eating this on its own with a spoon, and we both enjoyed it added to our plain yogurt, too.

I added an extra kiwi to the recipe (as indicated below). The amount of sugar you add will be based on how sweet your fruit already is and really, you may not need any at all. I used less sugar than the original, and also used a jelly with no sugar added (which is different than sugar-free jelly). I haven’t tried it personally, but if you want to keep refined sugars out of this completely but still want a little sweetness, I have no doubt that a little honey would work in place of the sugar.

Mix all ingredients in a large bowl. Cover and refrigerate for 15 minutes, or until ready to serve.

*I ended up serving this with store-bought cinnamon sugar pita chips. Making your own cinnamon-sugar pita or tortilla chips is not difficult at all, but I really just didn’t feel like making them and tending to them in the oven during our get together. If you want to make your own, Just cut a pita or flour tortilla into wedges, then spray with cooking oil and sprinkle with cinnamon-sugar (I generally do a 4:1 sugar to cinnamon ratio). Bake in a 425 oven until nice and crispy, about 8 minutes.