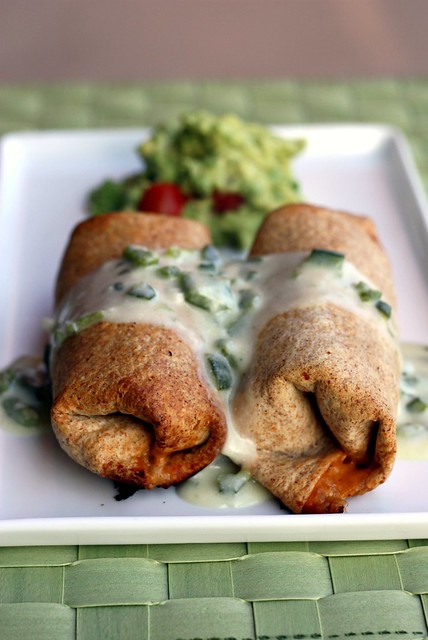 There’s a long, involved story about how these came to be on our menu, but the (not particularly) short version is my remembering a time we were at Chi-Chi’s (yep, Mexican chain extraordinaire) about 20 years ago. There was a big scoop of sour cream on my then 5-year-old-stepsister’s plate. She asked what it was and my dad, ever the jokester, told her it was ice cream. She ate a HUGE spoonful and I’ll never forget the look on her face. She hasn’t had sour cream since.

Anyway, at Chi-Chi’s, I’d order something called a chicken burrito suprema (at least, I think that’s what it was called). It was basically a burrito that had this really creamy, totally unhealthy mushroom and sour cream sauce on the top. I’m sure if I had it today, I wouldn’t think it nearly as awesome, but at the time, I loved it.

Obviously, this dish is a departure from that one, since it’s made with beef and there are no mushrooms in the sauce. I make so many chicken tacos, enchiladas, and everything else, that every once in a while I just really crave beef, so I went with it (and couldn’t have been happier with my choice).

I wanted to make burrito-sized versions of these but of course they only had white flour tortillas at the store so we got smaller whole wheat tortillas (I know, I really need to start making my own tortillas). One probably would have been enough, anyway, but I still gorged  and had two. Oops. 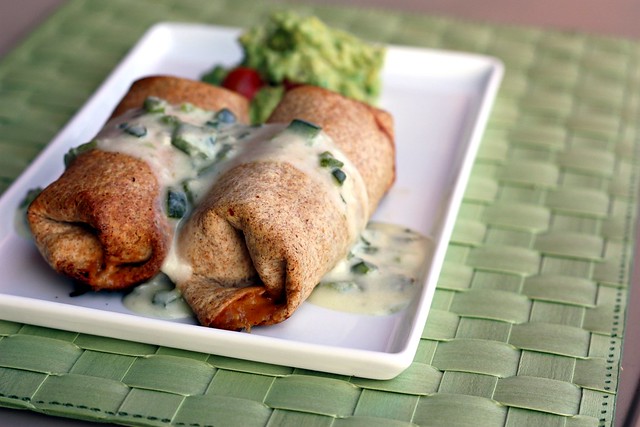