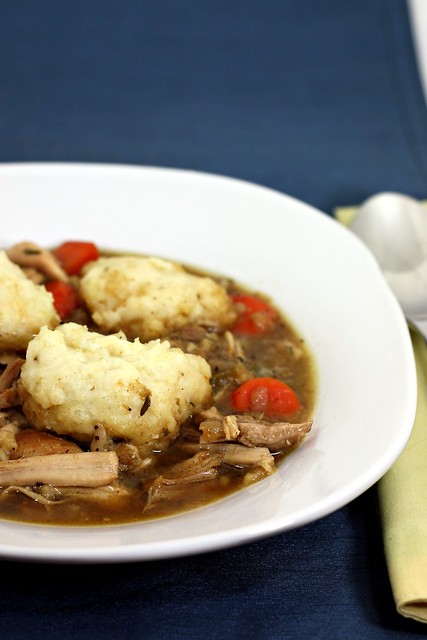 My dad makes the world’s best chicken and dumpling soup. He used to make it at his restaurant every Saturday and I loved when a trip home would overlap with a Saturday, because I’d get to eat a big bowlful. I’ve never asked for his recipe, partly because I know it would make like 5 gallons of soup and partly because I know it’s not the best for me.

This recipe is very different from my dad’s, in that it’s not as creamy and it’s not as soup-like (and it’s also not as fatty :). I did not expect this to be the same, and it isn’t, of course. However, this chicken and dumplings is a seriously wonderful meal, especially considering it’s not all that bad for you. It’s comfort food at its finest. I consider a meal pretty great when I’m ready to eat my lunch leftovers by 10:00 the next morning (and even greater when I actually do…oops).

The broth in the stew is absolutely fantastic. Simmering the dark thigh meat and wings together gives it a great depth of flavor (I mean, just look at that color!).  You’d honestly think the broth had been simmering away for hours. The dumplings are light and fluffy and—thanks to a great trick of wrapping the Dutch oven lid in a kitchen towel while they simmered—weren’t soggy or sticky-topped.

The only change I’d make to this the next time around is to increase the stew amount by just a  bit, which I’ve indicated below. I think there are plenty of dumplings for the intended servings, but the stew to dumpling ratio was just a little off for me. 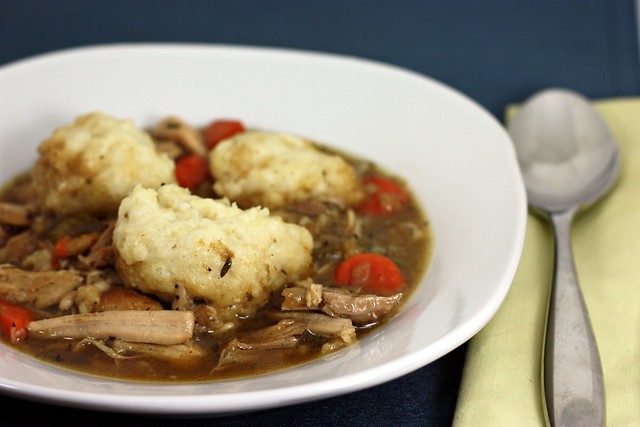 Pat the chicken thighs dry and season with salt and pepper.

Heat the oil in a Dutch oven over medium heat, until shimmering. Add the chicken thighs to the hot oil, skin side down, and cook until browned and crisp, about 5-7 minutes. Flip the chicken and brown on the other side for an additional 5-7 minutes. Remove the chicken from the pan and place on a plate. Drain all but 1 tsp. of fat from the pot.

Add onions, carrots, and celery to the pot and cook, stirring occasionally,  until caramelized, 7-9 minutes. Stir in the sherry, scraping up any browned bits from the bottom of the pot. Stir in the thyme and chicken broth. Add the chicken thighs and any accumulated juices to the pot, as well as the chicken wings.  Bring to a simmer, cover, and cook until thigh meat offers no resistance when poked with a paring knife, but still clings to bones, about 45 minutes.

Remove the pot from heat and transfer chicken to cutting board. Allow the broth to cool for 5 minutes before skimming the fat from the top. Once cool enough to handle, remove the skin from the chicken and discard. Cut or shred chicken into bite sized pieces (use thighs only or thighs and wings). Return meat to pot. (At this point, you can cool the stew to room temperature and refrigerate for up to 2 days. Bring to a simmer before continuing.)

To make the dumplings: Whisk together the flour, sugar, salt, pepper, and baking soda in a large bowl.  In a medium bowl (or right in the measuring cup you’ve used for the buttermilk), stir the butter into the buttermilk, until the butter forms small clumps. Whisk in the egg white. Add the buttermilk mixture to the dry ingredients and stir with a spatula or wooden spoon until just incorporated.

Return stew to a simmer. Stir in parsley and season to taste with salt and pepper. Wrap the lid of the Dutch oven in a clean kitchen towel.

Using a greased tablespoon, drop spoonfuls of dough over simmering stew, spacing about 1/4″ apart (about 24 dumplings total). Cover the pot with the wrapped lid and simmer gently until dumplings have doubled in size and a toothpick inserted in the center comes out clean, about 13-16 minutes.

6 thoughts on “Lighter Chicken and Dumplings”