I’d venture to say that pastitsio is one of the most popular Greek dishes. It’s right up there with spanakopita as my most requested  recipe, or the dish others tell me they order in Greek restaurants. Pastitsio is basically the Greek’s version of lasagna. It’s a layered dish of pasta (traditionally, bucatini/good ol’ Misko No. 2), slightly spicy meat sauce, and a cheesy bechamel.  My yiayia usually added a few breadcrumbs on top (in addition to more cheese), so I do that, too.

If you’ve followed my blog long enough, you may remember the first time I posted pastitsio based on my grandma’s “recipe.” I’ve modified this recipe a bit since then (but if you want to see the original source, my yiayia, click here :-P).  I noticed my friend Peter was asked to be on the judging panel for a “Taste of the Mediterranean,” sponsored  by igourmet. The Greek dish for this event is pastitsio, so it seemed like the perfect opportunity for me to make it (I’d  been craving it, anyway) and update the version in my blog.  If you would like to make your own version of pastitsio and participate in this event, you can see the details in Peter’s blog, as well as Tony’s.

Every version of pastitsio I’ve had has had an aromatic, spicy meatsauce, and mine is no different. I think without the spice, this turns into your standard lasagna with bechamel on top.  I make the meatsauce very similarly to the way I make the kima for pasta. It’s a very thick, flavorful sauce and  holds up well against the creaminess of the bechamel. Sometimes I have whole cloves around, sometimes I have allspice berries, sometimes I only have ground…this is really about what you have and how you want it to taste. Play around with the amount to suit your tastes. To someone not used to cinnamony/clovey meatsauce, you may want to reduce the amounts. Who am I to school you on your tastebuds? After all, this blog is about learning both for me and for you – why do you think I have adapted my own version over the last two years?!

Tom and I both love pastitsio. To me, it’s comforting not only because it’s pasta, slow cooked meatsauce and creamy bechamel, but because it reminds me of home.

If you can’t find kefalotyri or myzithra, just use a good salty cheese like pecorino romano or parmesan. Just please no green can! 🙂 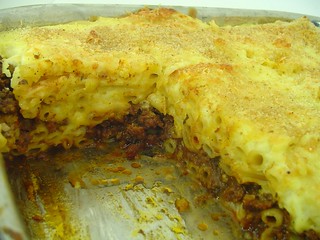 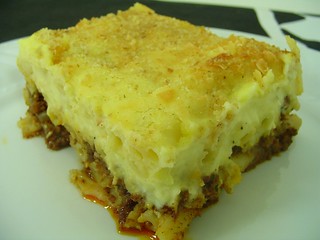 Cook the bucatini until barely al dente in a large pot of lightly salted water. Drain, and then mix well with the beaten egg, butter, and the myzithra cheese. Toss until butter has melted.

Pour  half the pasta mixture into a 3 qt. baking dish.  Layer the entire meatsauce mixture over that, followed by the remaining pasta. Finally, pour the bechamel sauce over the noodles, and spread the mixture evenly.  Top with the kefalotyri cheese and the breadcrumbs, if using.

Bake for about 45 minutes, until golden brown on top and bubbly. Let it sit for 10 minutes before slicing.

In a large heavy bottomed pan, heat your olive oil. Add the onions and saute until tender. Add the beef , cooking until browned. If beef is very fatty, drain off. Stir in the tomato paste and garlic and cook for a minute before adding the water, cinnamon stick, cloves/allspice, parsley, bay, and salt and pepper to taste. Bring to a boil and then reduce heat to a simmer. Simmer, partially covered, for an hour, stirring occasionally (meatsauce should be very thick, but if necessary add a bit of extra water).

Melt butter in a large saucepan. Stir in the flour and make a roux, cooking for a few minutes until light golden brown. Slowly add the milk, whisking constantly. Bring the mixture up to just barely a bubble.  Continue cooking (and stirring) until the mixture thickens and coats the back of a wooden spoon. Add the nutmeg and season to taste with salt and pepper.

Off the heat, whisk in the cheese, eggs, and egg yolk.