I have been a pretty horrible blogger lately, so the tardiness of this post should come as no surprise. I should have started posting the submissions as I received them, of course, but I am a huge procrastinator. Plus, I have been a little busy transferring my site (I know, I feel like I talk about this *all* the time but I finally have my posts all moved so look for a move soon!). Sorry I haevn’t been around and commented as much as I normally do, but I am hoping to get back to business here soon!

At any rate, this edition of Eat to the Beat is, like the ones before it, full of delicious eats and great beats. I’m always happy to see these posts as they come in. Everyone is so creative. So, I’ll quit the babbling already and get to the round up. As a reminder, if you would like to participate in the next Eat to the Beat, just check out what you need to do. The deadline is the end of the year, so you have plenty of time. Note: I have fixed the images on here so many times and some just keep disappearing. I am really sorry and not sure what else to do, but hopefully the lack of pics on my end will force you to visit some of these great blogs!

I really love the creativity that comes out during this event, and Kelsey at Apple a Day kicks off EttB with a great song/dish connection. Kelsey makes this seriously gorgeous lemon crostada with fresh figs and goat cheese. I think those are 3 of my favorite ingredients on the planet. But, it’s been seven years since Kelsey could find herself some fresh figs so when she finally found them, she had a euphopric moment–choosing the “Hallelujah” Chorus from Handel’s Messiah as her Eat to the Beat music. 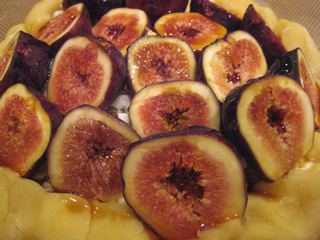 Perpetually creative participator Erika over at Bean’s Bistro shares a cherry coca-cola jello salad for Eat to the Beat. Her cooking-with-coke was inspired by a song by Shiny Toy Guns song called “Jackie will Save Me” that goes “I think you’re slipping/American coca cola/Sugar sweetness.” So Erika slipped some coke into this cherry jello. For the record, I adore cherry and coke together. Whenever I buy a slurpee, it’s half cherry, half coke. Just so you know. 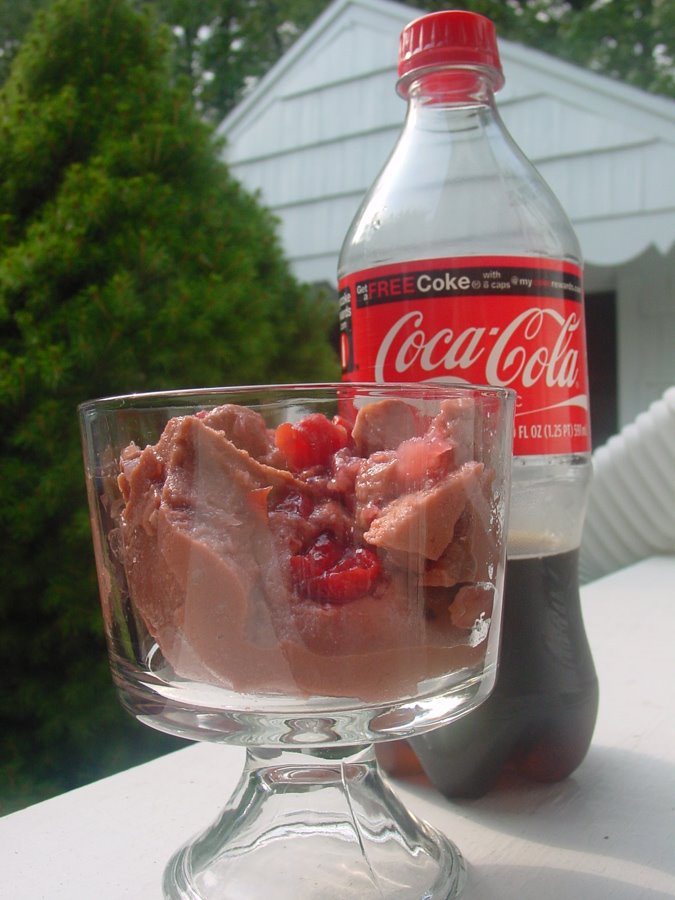 My friend Cara, who runs Cara’s Cravings, made some magic rice for this event. The magic? That’s not actually rice you see–it’s cauliflower! Cara used a food processor to make rice-sized pieces of cauliflower and then steamed it. Not surprisingly, Pilot’s “Magic” was running through her head as she looked at the faux rice. Oh, oh, oh it’s magic, you know! Never believe it’s not so… 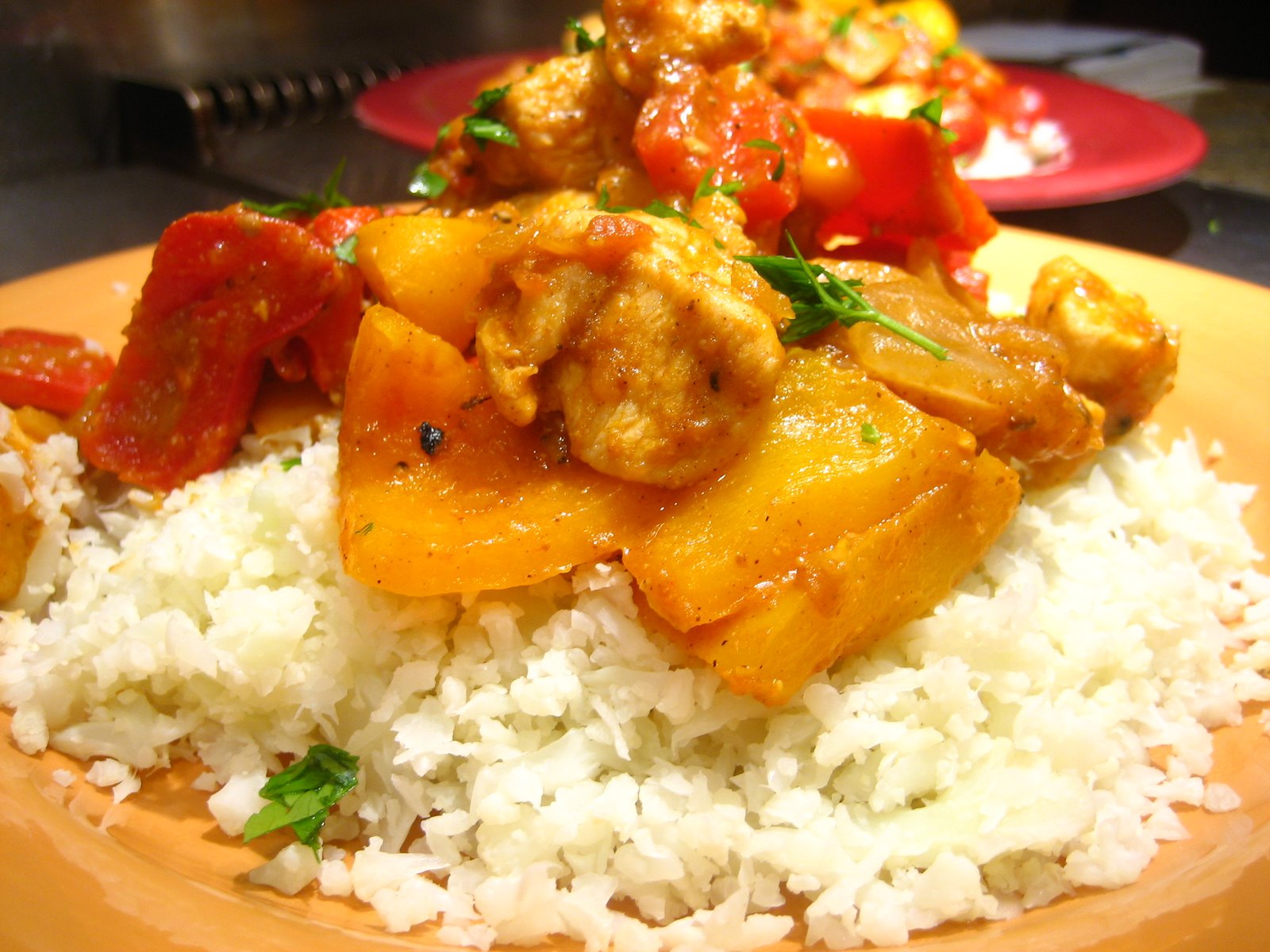 Mmm, I love cornbread and this cornbread salad made by Kayla at Central Cooking is such a fun, new way to use cornbread (besides just inhale it, which is what I typically do). Kayla used the song “Cornbread” by Dave Matthews Band as her backing track for this great side dish and also talk about how she and her husband connected through music – I alway love reading stories like that 🙂 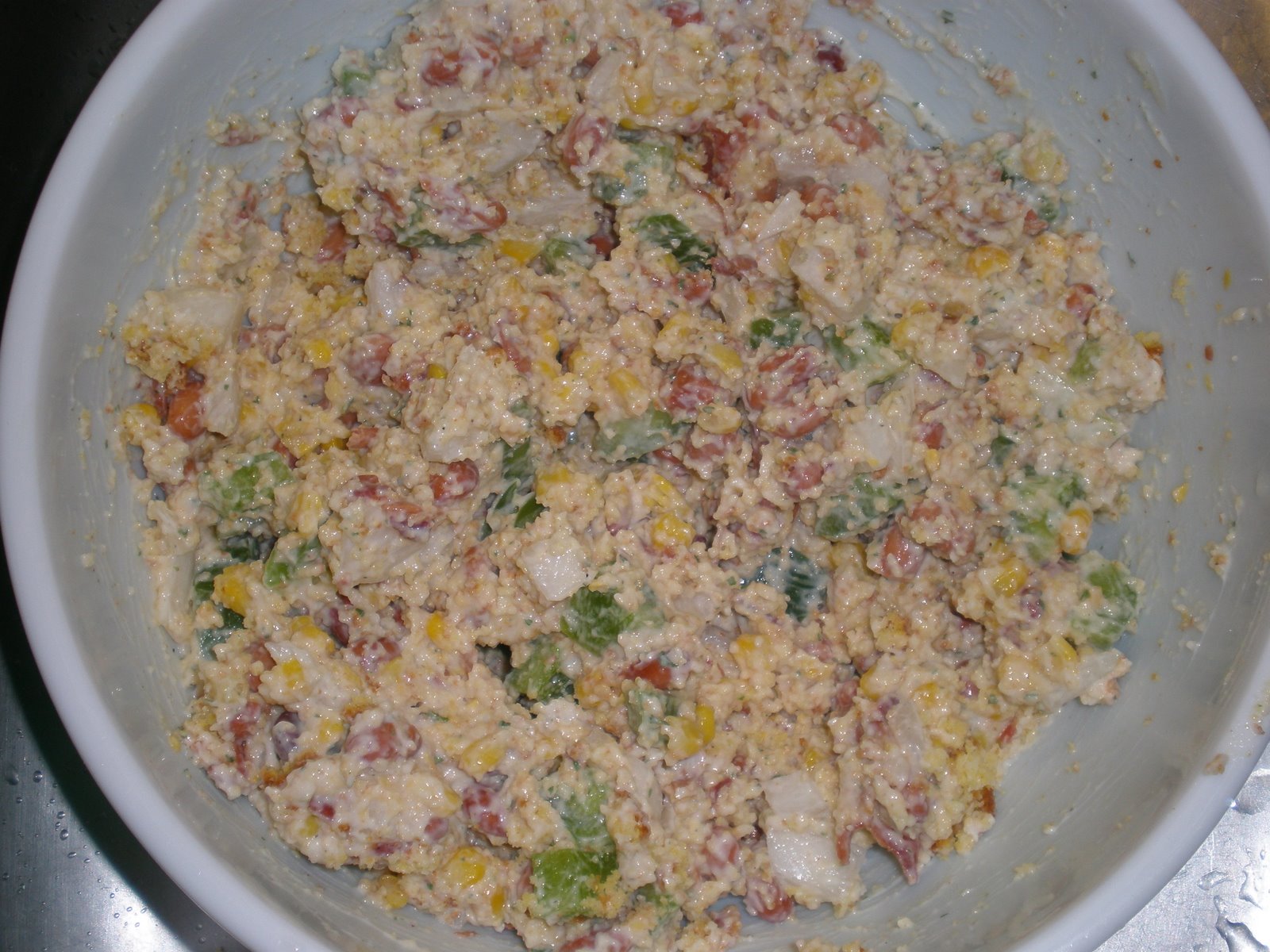 Just the title of this cake is enough to make me drool. Dell, who runs Cooking and the City, brings to EttB a brown sugar chocolate cinnamon cake. You want a piece, don’t you? I sure do! This cake was inspired by none other than the classic Rolling Stones song “Brown Sugar” which is a favorite of mine. This cake started as a mistake because the top of it was cracked and Dell smartly covered it in chocolate to hide its imperfections. You can never go wrong covering anything in chocolate. That’s a fact. 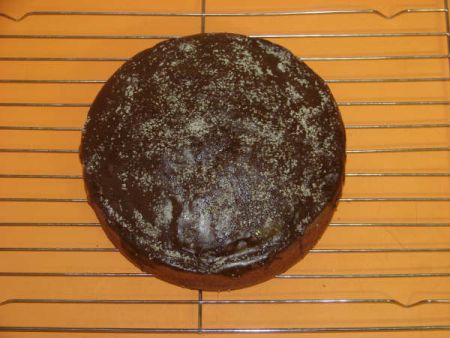 SilverMoon at Dragon Musings cooks with her kids on Cookie Day and makes these melt in your mouth (literally) vanilla meltaways. These cookies are based on Melting Moments (which I don’t think I have ever tried!) and Shonen Knife’s song “Cookie Day” (which I enjoy). 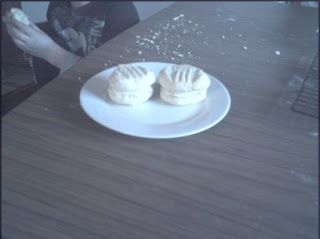 Stina at Eat Something is cracking me up with her entry of a “heffa-ed up” buttermilk pie. When you heffa something up, you create something nice and fatty (and delicious, of course). Stina’s heffalicious version of this pie ties into her song choice of “Girls Love Pie” by Nasty.

Psychgrad, one half of the food duo behind Equal Opportunity Kitchen is feeling a lot like I have been with blogging lately–by the time I finally make a post, the food is already gone and becomes a little more difficult to recall. That’s why Psychgrad chose the song “Yesterday” by Boyz II Men as she was remembering this ridiculously good looking peanut butter cup cake. I’m pretty sure I would remember that cake any day! 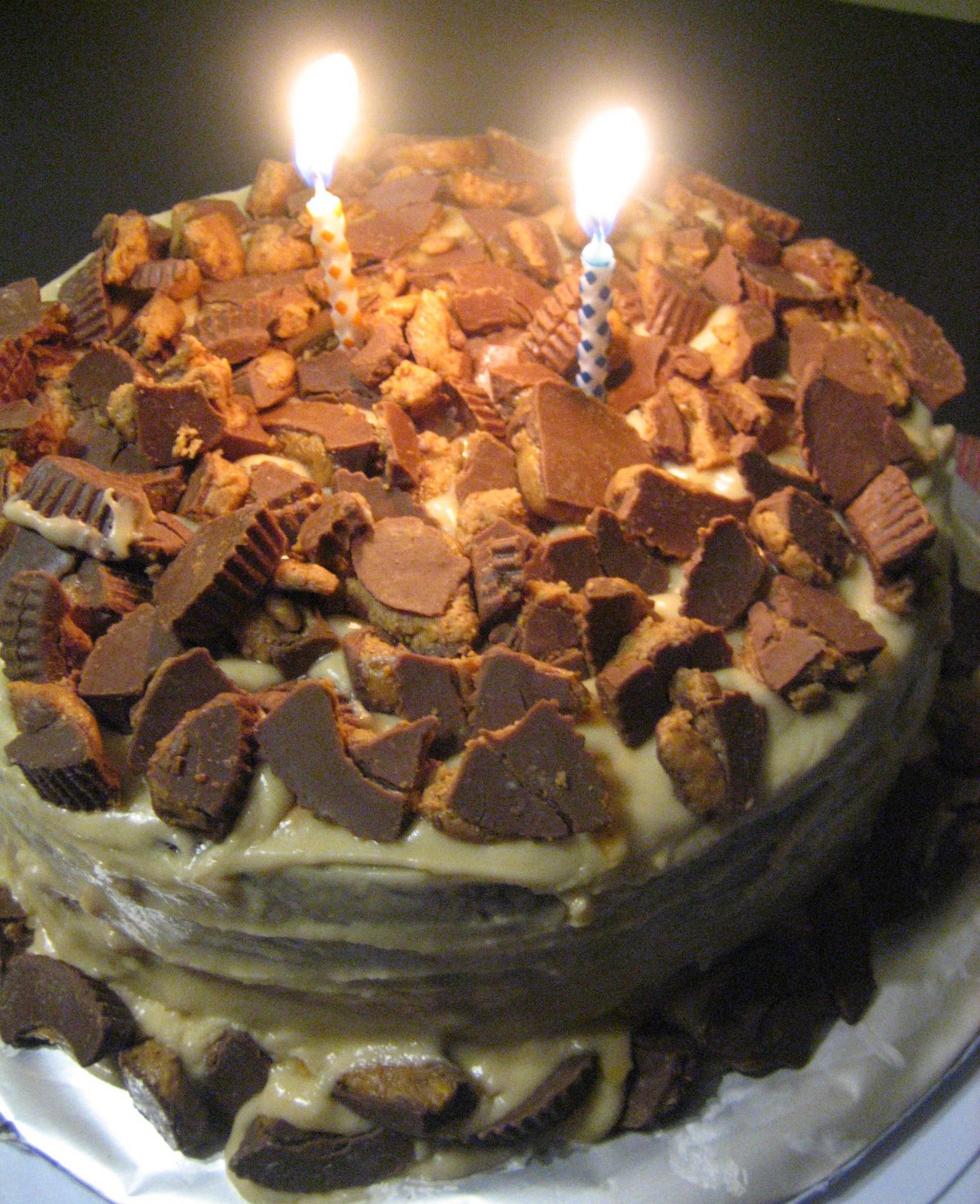 New EttB participant Joan, who runs FOODalogue uses the song always playing at everyone’s local Italian eatery (or, at least mine!) “Mambo Italiano” as inspiration for this Spanish take on a classic Italian dish – pizza! This Spanish Tapas Rolled Pizza. The fact that this pizza has one of my favorite ingredients in it–chorizo–definitely has me singing! Maria, a first generation Greek like myself who heads Kali Orexi, makes a really great spin on the classic avgolemono (egg lemon) soup by making asparagus and dill avgolemon soup. I love avgolemono, and I love asparagus, so this soup will definitely be made in my house sometime soon. Maria uses the song “Lemon” by U2 as inspiration for this lemony soup (and causes me to to be nostalgic and listen to U2 for a week straight). 🙂 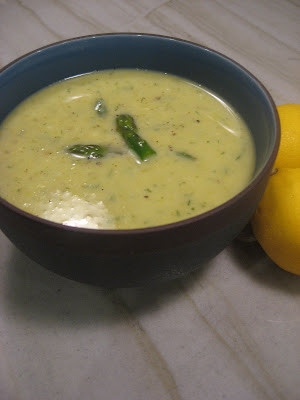 Another fellow Greek (represent!) Peter at Kalofagas was probably doing some headbanging when you made this entry to tie AC/DC’s “Back in Black” to his dish of Charred and Roasted Pork Tenderloin with Black Trumpet Emulsion. That’s right, I said black trumpet mushrooms. And pork tenderloin. I said emulsion, too, in case you are keeping track. Ok but anyway, this is one of those recipes that I instantly starred in my reader to try. It just looks way to good not to. 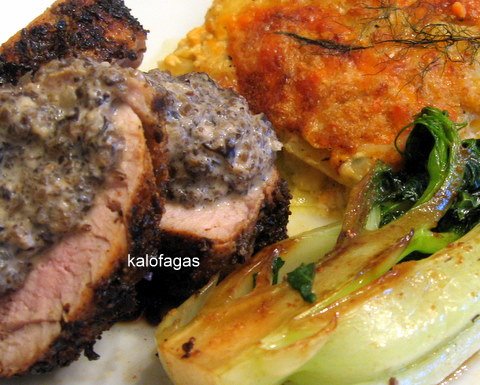 Greek number 3 (what can I say? we run in circles, and apparently alphabetically), Ivy at Kopiaste, has managed to find a hilarious (and sort of trippy–go to her site to see the video) song called “The Biscuit Song.” She decided to make biscuit cookies with some lovely homemade fig jam (my favorite). These cookies are so cute! The hole where the fig jam shows is fashioned from an ouzo bottle top. Gotta love that 🙂 When tomatoes are fresh and ripe in their peak season, there are few things better than them in my opinion. And, as you’ve also heard me say on this blog before, I’m a big fan of pesto–of many varieties, and on pretty much anything. So you know when Val of More Than Burnt Toast sent me her entry – an heirloom tomato salad with pesto vinaigrette – I was drooling up a storm. Those lovely tomatoes tie in perfectly with Val’s song of choice, “Homegrown Tomatoes,” by John Denver. 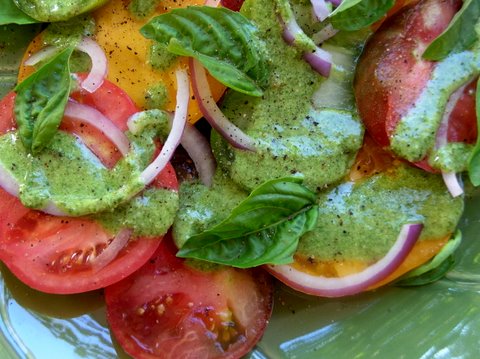 Lindsey, who runs Noodle Nights and Muffin Mornings (and has very similar tastebuds to me, I have noticed over the last few months!) takes one of my favorite TV shows as a kid, The Monkees, and makes some monkee cake, loaded with bananas (of course) and raisins. I’m sure you remember the band The Monkees. Personally, I was always a Micky fan. You? 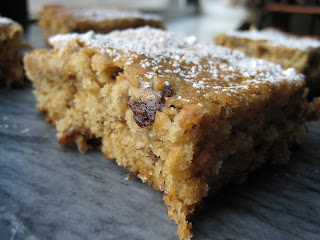 My friend Kate over at Paved with Good Intentions definitely went old school with this challenge, picking one of my favorite bands from middle school.  Yeesh, I can’t believe it’s been that long. At any rate, I’m sure you all know the Gin Blossoms. Man, 90s rock and pop was SO good. And Kate has made a tribute to the band  (and their love of drinking)with her Gin Blossom drink (made with rose flower water). 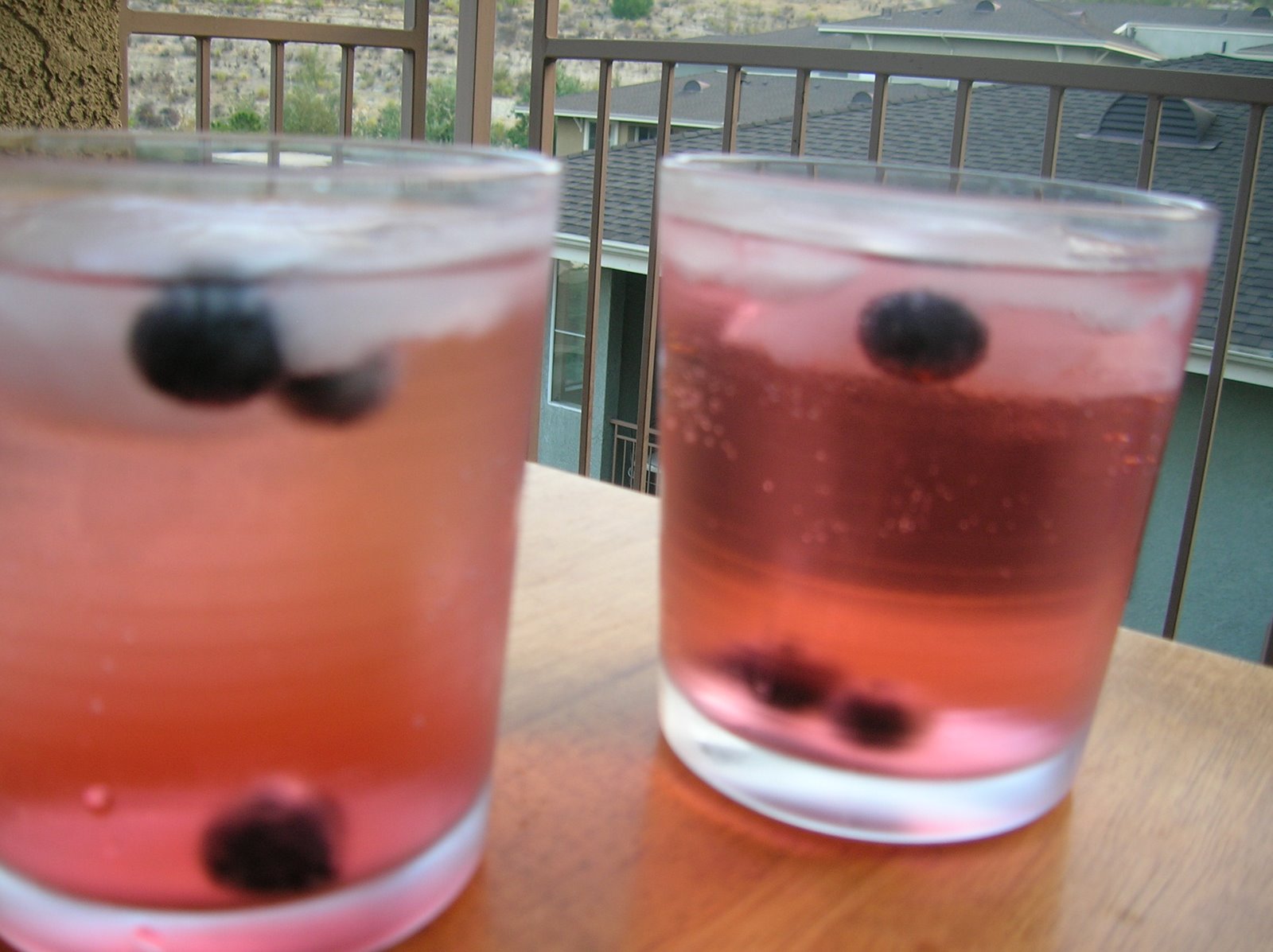 Newcomer Leslie from Pixiepine Palace shows us several ways she connects music and food in her kitchen. She says “music sets a mood and can even make food more delicious.” Leslie talks about how she likes listening to internet radio for international dishes, to get a more authentic feel and making her own music compilations to listen to as she cooks. 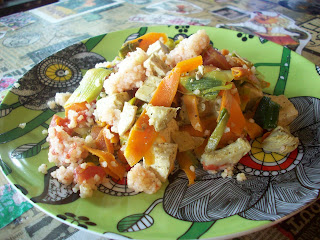 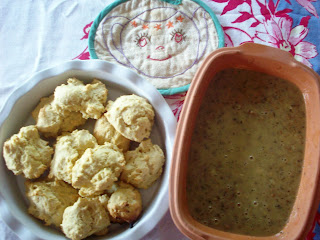 Mollie at Reading, ‘Riting, and Recipes takes a “Slow and Low” approach a la the Beastie Boys to grill some chicken leg quarters (my favorite!). Chicken seasoned with a dry rub and some great bbq sauce, cooked for a while over low heat are what make these incredibly moist and delicious. 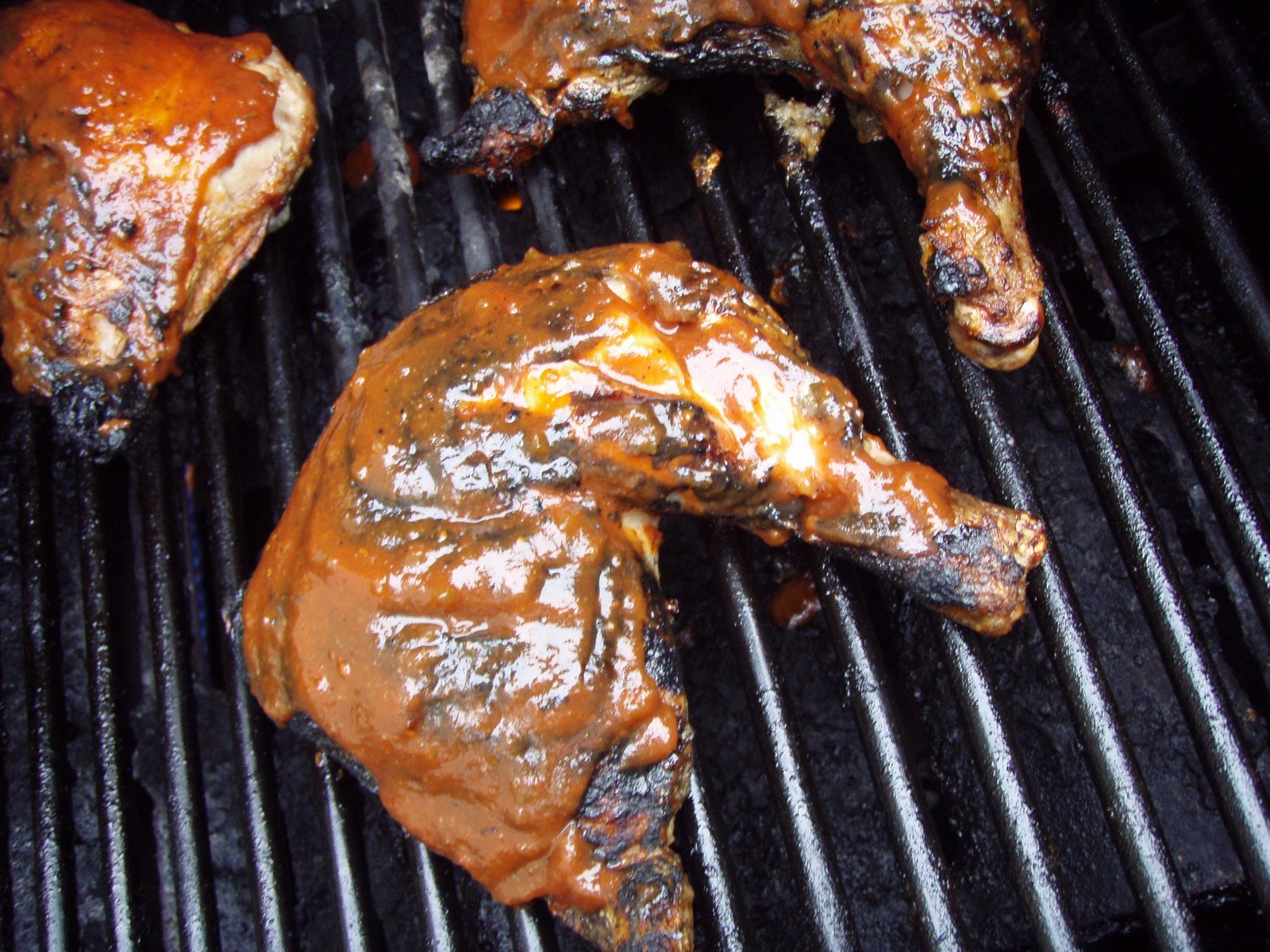 Nuria, who always gives us lovely Spanish Recipes, cracks me up this time with her song reference. She chose Paul Anka’s “Put Your Head on my Shoulder” because of the way this ocotopus head is resting on potatoes. Hehe. I don’t even like octopus but this octopus in stew looks so good! 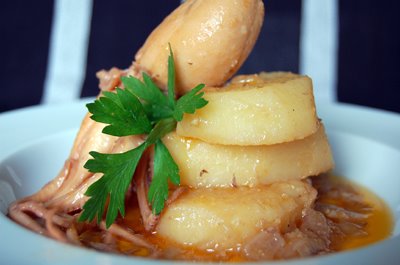 Anyone around my age remembers Adam Sandler’s SNL skits and CDs where he would sing hilarious songs. Remember “Lunch Lady?” If you do, there’s  no doubt the first part that comes to your mind is the “sloppy joe, slop, sloppy joe, hey!” part. At least for me! Steph over at Steph’s Kitchen uses that song as inspiration to make some homemade sloppy joes that look more extra fabulous than they do “extra sloppy.” 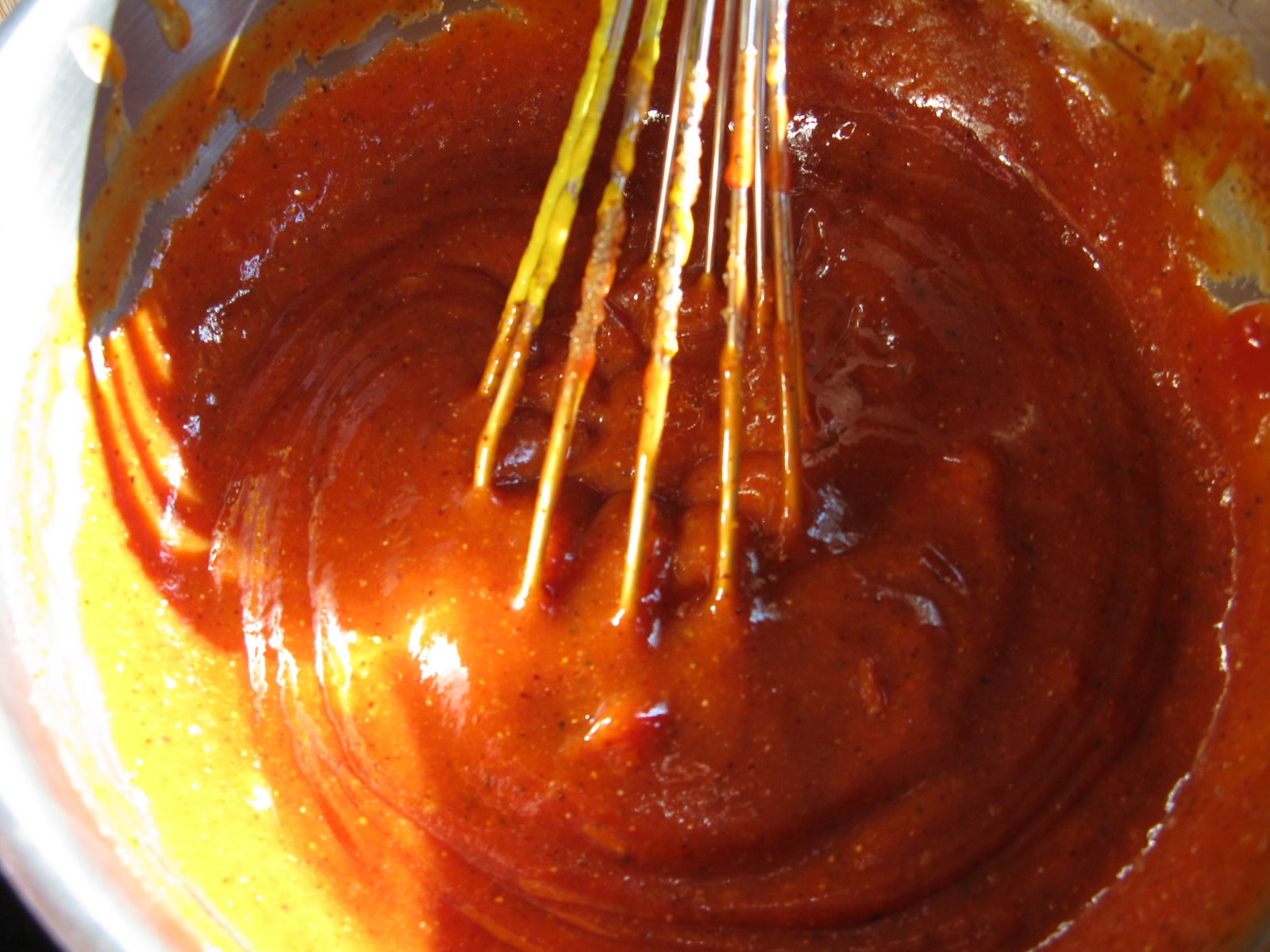 Bridget runs The Way the Cookie Crumbles and her husband, like mine, likes writing songs. So, the song Bridget chose for this event was one written by her own husband in grad school called “Bustle.” One of the lines from that song is “dripping red” which instantly made Bridget think of something bloody, and what is bloodier than red wine sauce dripping down dead animal? This pan seared steak with red wine sauce has me drooling up a storm.

Ben at What’s Cooking? put boring ol’ scrambled eggs aside, turned up his mariachi music, and created these gorgeous huevos a la mexicana for Mexican Independence Day. Just looking at those eggs with the beans and tortillas makes me want to whip up some huevos of my own right this minute.

This time around, I went with the Tori Amos song “Raspberry Swirl” and made some light vanilla raspberry swirl bread (after a few complications with other entries, of course). Oh sure, this is not kind of raspberry swirl Tori was talking about, but hey, it will still make you feel good. 😉