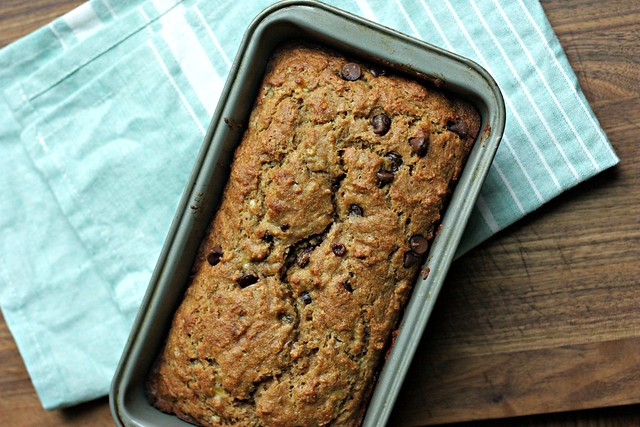 I have a weird relationship with banana bread. I’m not that crazy about it, but every once in a while it sounds really, really good. And then I’ll have some and be like huh, this stuff is actually really good. And then I kind of forget about it, make a million other kinds of quickbreads that sound better, and have that infrequent but strong craving for banana bread again months later. Rinse, repeat.

Now that we’ve had that riveting conversation, onto this particular banana bread. The nice thing about banana bread is that it’s easy to make it relatively healthy because mashed bananas make the bread so tender and moist <shudder> that you can reduce the oil and butter. They also lend some sweetness, so  you can decrease the sugar (and I, in fact, decreased it further than the original recipe). I did make some additional changes to this, like using all white whole wheat flour, using half brown sugar, and adding some cinnamon (banana bread without cinnamon is like a gyro without tzatziki) and chocolate chips. 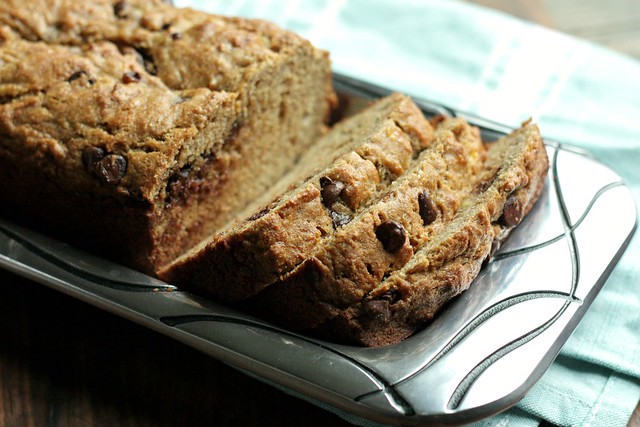 Overall this was a big hit with everyone. I left it out the first day/night but refrigerated the leftovers after that. The banana/yogurt combo has a tendency to almost get *too* moist <double shudder> and almost soggy if you leave it out too long. The kids are always so excited to eat breakfast the days after we make quickbreads/muffins and recipes like this make it easy to comply with their requests to make them in the first place!

One thought on “Banana Bread”