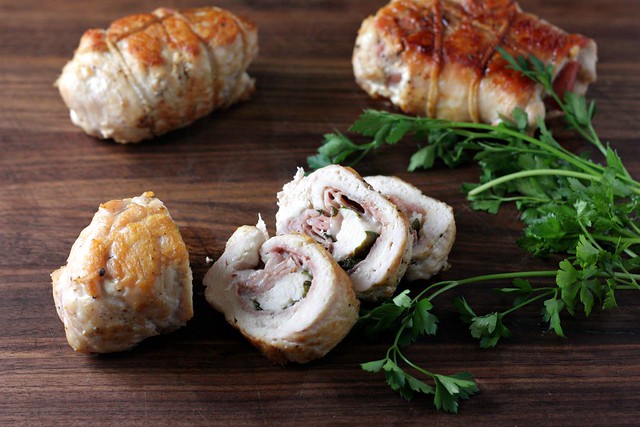 Saying we’re having chicken for dinner has been eliciting a lot of groans from my eldest lately. And, because he wants to be like his big brother (most of the time), my youngest has now followed suit. It’s not that they don’t like it but they DO want something “different” to be done with it (or they want chicken thighs and not breasts; how could I blame them when they are far superior?) and they’re a little tired of it. To be fair, we do eat chicken far more than any other protein, but in the immortal words of, uh, moms everywhere: Too bad. If I’m making meal plans and grocery lists and doing the cooking,  there will be no complaining about the eating. So there.

ANYWAY. As I’ve no doubt said many times before, prosciutto makes everything better. And boring old chicken breasts (yeah, I do tend to agree…) are made a little less boring with the salty, cured deliciousness that is prosciutto. This chicken is wrapped around prosciutto, basil, and provolone, then browned on all sides before finishing up in the oven. While the chicken is resting, you make a mushroom saute/sauce to serve alongside.

The “sauce” is not too saucy, but really is just sauteed mushrooms in some lightly thickened broth (not that this is a bad thing, but since I didn’t actually picture the sauce I didn’t want any confusion). Considering mushrooms and prosciutto are two of my husband’s and my most favorite things (and that the mushrooms are easy enough to not include since they don’t make the cut on my kids’ favorite things lists), this was definitely a win.

We had this with roasted fingerling potatoes and roasted broccoli, but it would also go really well with some type of cannellini bean side dish, be it mashed, a salad, or simmered with a little broth/tomato paste and spinach.