I posted last year at this time that I was going to do a blog redesign (done!), post more often (uhhh) and do some non-food related posts (does 1 count as more?). Then, something like 5 minutes passed and here we are again. Seriously, this year is such a blur.

It’s not that things changed THAT much or anything this year. I think we all just got busier. Having two kids is pretty busy as it is, but add parents who work full time with a long commute, one kid who started at a new school (meaning the end of the one pickup/dropoff location for both kids), more responsibilities at work, and the occasional sports/events and, well…yeah, where did 2016 go?

The good news about Zachary starting at a new school is that we had to get a second car (yes, we made it in the ‘burbs for nearly 3 years with 1 car) and I now get to take the train closer to home, which means I’m home a good half an hour earlier. That half hour is a beautiful gift.

I kind of liked doing some non-food related favorites in last year’s end-of-year post, so I’m going to do the same this year, especially since I’m doing a shorter list of food faves this year after posting less frequently. Shall we?

I wouldn’t dare name my top 5 albums of the year, because my husband keeps asking and I keep saying I don’t know, and he keeps telling me to think about it, and I say okay, and then I don’t really. So I’ll just say that I’ve enjoyed (new) music this year from Big Thief, Lucius, Frank Ocean, Chance the Rapper, Angel Olsen, Mitski, and Hamilton Leithauser + Rostam.

Television shows I’ve thoroughly enjoyed over the last year include Veep, Stranger Things, Silicon Valley, Better Call Saul. Full disclosure: Atlanta will probably be on this list, but as of this posting we’re only a few episodes in.

This year I read 35 books (well, really 34 since one was just a published Ted Talk) and managed to give five 5-star reviews, which is rare for me. They were for A Little Life (probably the most engrossing, if not also the most anguishing book I’ve read), Just Mercy (absolutely required reading, especially for those interested in issues of social justice and mass incarceration), Shrill (both hilarious and empowering), Columbine (apparently I was all about anguish this year?) and the aforementioned Ted Talk, We Should All Be Feminists (we really should).

So there you have it. And now without further ado, my top 5 personal favorites for 2016 and the top 5 reader favorites (based on traffic) for 2016. Thank you so much for reading this blog. It means the world! My family and I wish you a fantastic 2017!

(Oh, and feel free to browse best-of lists from the ancient times to the present.) 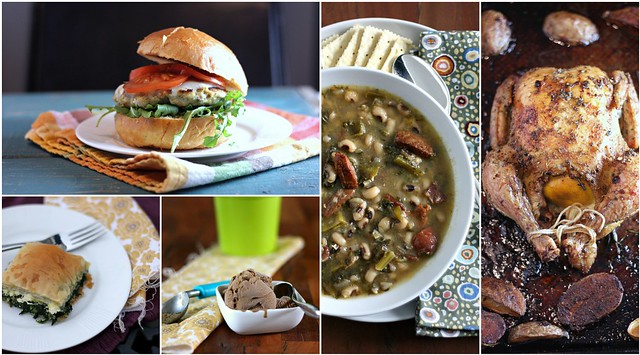 Black-Eyed Pea Stew with Kale and Andouille – Okay, so technically I’m cheating here because this was posted at the end of 2015. But it didn’t have a chance to be included in last year’s roundup because I had already written the roundup post, even though I hadn’t published it, before blogging the stew. Perfect for your dose of new year’s luck, this stew is also incredibly hearty and flavorful. I’ve since made it in the slowcooker twice and it works really well in there, too.

Spanakopita – Amazingly, it took me a decade to blog a traditional spanakopita. I promise it’s worth it.

Pesto and Red Pepper Chicken Burgers with Provolone and Balsamic Tomatoes – these bad boys quickly became a favorite burger in this household. The pesto not only lends that delicious basily-garlicky goodness, it also keeps the burgers moist. The provolone and balsamic tomatoes complement the patties beautifully.

Fauxtisserie Chicken – I have a potentially unhealthy and admittedly strange obsession with grocery store rotisserie chicken. Here’s an at-home version that, as a bonus, also makes pretty awesome potatoes.

Root Beer Ice Cream – like a float without the, y’know, float. 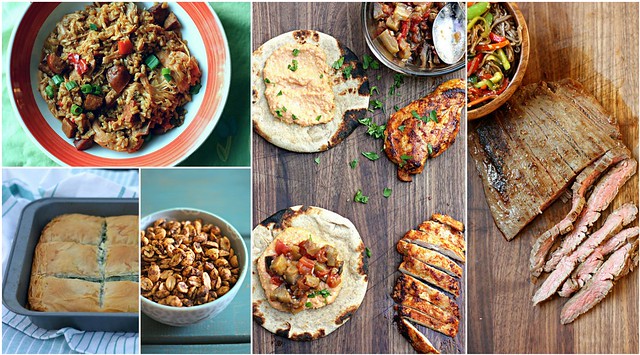 Spanakopita – aaand there she is again! 🙂

Slow Cooker Southern-Style Chicken and Dirty Rice – this narrowly missed my own top 5 so I can see why you guys like it! Terrific slow cooker meals are always more…terrific? than regular meals in my opinion, because it can be tricky to get a truly delicious slow cooker meal. This one definitely delivers.

Spiced Moroccan Chicken Wraps – if you think wraps and sandwiches are boring, these will definitely have you singing a different tune. Although there are a few more components to this than a standard sandwich, everything is easy to make and can be prepped ahead.