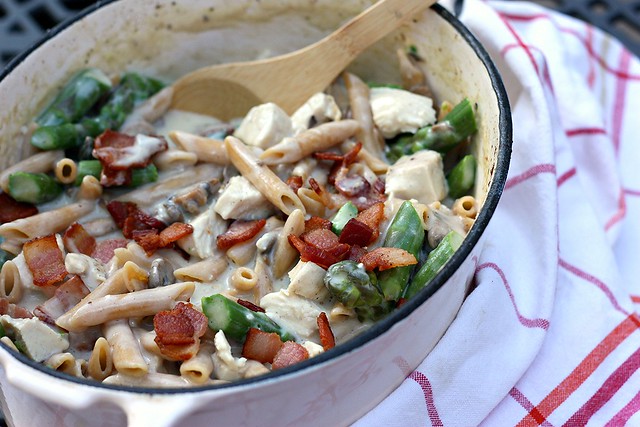 Apologies for posting this pasta so close to the veeeeeeery end of asparagus season, but I wanted you to have it. I’ve been in a bit of a blog funk/semi-break and we also took a short vacation last week, so I’ve been more into having other people cook for me than doing it myself. Not a bad deal.

I bookmarked this recipe as soon as I saw it and made it pretty quickly after. It’s a creamy pasta that doesn’t actually use cream, but achieves its creaminess from a combination of cooking the pasta in a broth/milk mixture and making a smooth sauce from more milk and cream cheese. So, yes, there is bacon, but in the creamy pasta world, this is actually a pretty decent option, health-wise.

I did add chicken to this (no one ever has to worry about this blog turning vegetarian…). Whenever I eat something as carb-heavy as pasta, I like to make sure it’s balanced by protein. Plus, this also allows us to get full on smaller servings.

Now, I would be lying if I said this was a hit with the whole family. Zachary, who used to adore asparagus, has now decided he’s just not that into it. Ian never really has been. Neither of them THINK they like mushrooms (They do. The eat them all the time without realizing it. KIDS, MAN.) and Ian has a lot of deep thoughts on creamy pastas (namely, which pasta shapes are appropriate to eat with cream sauces, what kinds of cream sauces may be eaten without complaint, standard 3yo shenanigans). So yeah, another reason to add the chicken (I never make my kids a separate meal but in the rare event I’m making something one of them legitimately doesn’t like, I will make sure there are at least 1-2 things on the plate they eat). We also had this with a salad.

Tom and I, on the other hand, were big fans of this and I thought it made for great leftovers, too. If you don’t have time to make this while asparagus is still good, a different green vegetable like broccoli would be a good choice, or even wilting some leafy greens into it at the end. 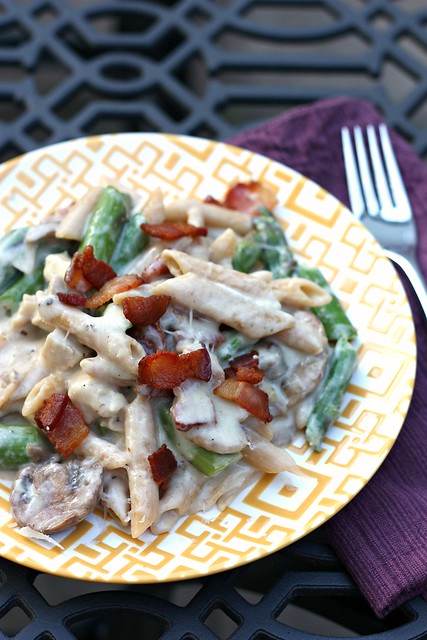 One Pot Creamy Asparagus and Bacon (and Chicken) Pasta