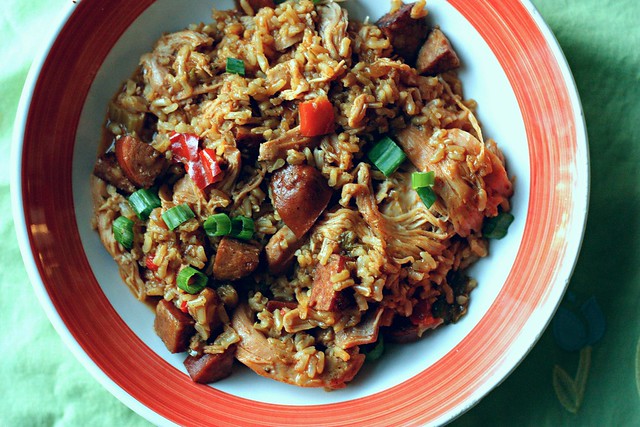 For a blog that’s been around as long as this one (almost a decade!) written by a busy mom, you’d think there would be hundreds of crockpot recipes. That’s not the case because I tend to have a very difficult time finding good crockpot recipes. They either contain processed ingredients, turn to mush, or have unrealistic cooking times. In fact the book series this came from is totally guilty of that last thing. They often want you to cook things for 2-4 hours which, ugh, I do not work a 2-hour day, America’s Test Kitchen!

So anyway, I will admit that this recipe does have a shorter cook time than some slow cooker recipes, but I did prolong it a bit with no issues. I do think this recipe, though, works best on a non-work day (unless you have a fair amount of time in the mornings, or want to prep it the night before, which is certainly possible). It’s not difficult but there is definitely some prep involved (ah, the irony of not having time to assemble the very thing that is supposed to save you time later). For us, this meal was perfect on a recent weekend day where we traveled to the city for a birthday party. We knew we’d be getting home right around dinner time, but since it was an afternoon party, I had time in the morning to get this together.

This recipe totally deserves a spot in my small-but-worthy crockpot category. The highest compliment I can give a slow cooker recipe is that it doesn’t taste like a slow cooker recipe. And this one doesn’t. In fact, it reminds me a lot of this red beans and rice with andouille, with less kick. It went over really well with the whole family and it was so good as leftovers, too.  All right, America’s Test Kitchen. You make me angry with your presumptions about slow cooking times, but you turn out a damn fine meal, yet again.