Happy pi(e) day! I made you a macaroni pie! Actually, first and foremost, let me just state that I would personally call this a spaghett pie. 🙂 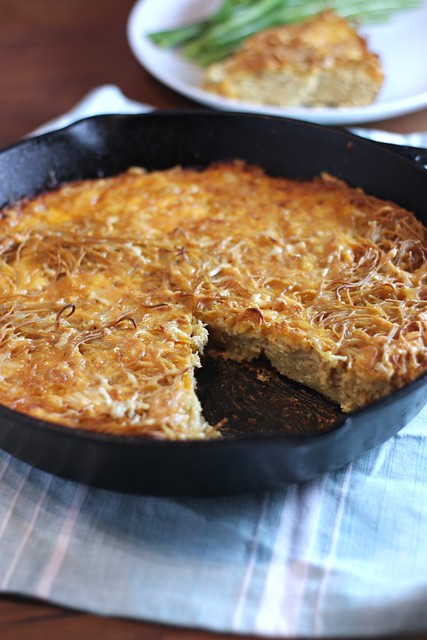 Now that we’ve got that out of the way, this dish is basically what would happen if a frittata and baked pasta got together and had a baby. You cook the pasta and then add it to a mixture of eggs, milk, and cheese. Lots of cheese. Then bake it  until the the milk mixture is absorbed and the spaghetti becomes crisp on the top. I’ve made similar things to this before, like what Tom affectionately refers to as “spaghetti frisbee” and an orzo frittata. This was a little different than my go to because it didn’t have any kind of “filling” besides pasta and because of the aforementioned loooots of cheese.

Normally I write my changes right into the recipe but for various reasons, I decided to keep the recipe as I found it and include my changes in the notes below the recipe. I will also say that, though I reduced the amount overall, it still made a whole lot of food. If you’re serving this as more of a side, which we did, take that into consideration. We had this with green beans and meatballs that I baked with balsamic barbecue sauce and it was a big hit.

From Callie’s Biscuits and Southern Traditions by Carrie Morey, as seen on Yahoo