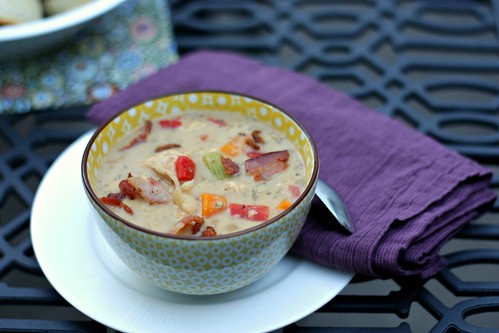 We’re really big cannellini bean fans. Like, really big. We love them in soups, salads, sides, and of course one of our favorite dinners. Recently, I wanted to make a soup that had protein and some substance, but didn’t have rice or pasta. That can be tough, especially when you’re not a fan of “plain” soups like tomato. Nothing against pasta or rice, of course, but we tend to already have both once a week or so, and I like variety. This soup, loaded with vegetables, chicken, beans, and bacon certainly fit my criteria.

I keep telling myself I’m going to move exclusively to dried beans and I haven’t yet because I am just forgetful (meaning, I don’t remember to cook them in advance and don’t have time to do so on a weeknight). However, this time I did remember to throw a bag in the crockpot, which is the easiest way to cook them in my opinion. No soaking, no boiling. Just toss them in there, cover them with water, and cook on low for however long you are at work or whatever. Super easy, and also a bit more economical. Also, last time I made a bean soup using canned beans I ended up in urgent care, so probably safer, too. 😉

I made a few changes to this soup, the most prominent being using twice as many beans. In addition to that, I blended about half of them with some broth before adding them to the pot, which is a really great way to thicken soup without adding a bunch of calories through flour, cream, or cheese. In all honesty you don’t really need the cream added at the end, but it does give it a bit of a silkier texture and half a cup across 5ish servings won’t break the calorie bank.

Liberally adapted from An Edible Mosaic

In a Dutch oven, cook the bacon until it has rendered its fat ans is mostly crisp. Remove with a slotted spoon to a paper-towel lined plate, keeping the rendered fat in the pot. If there is more than a tablespoon of fat, drain off until you have about 1 tablespoon. If there is less, add a little butter or oil to the pot.

Saute the carrot, celery, onion, and bell pepper until starting to soften, about 3-5 minutes. Stir in the garlic, bay leaf, thyme, and marjoram and saute until fragrant, about a minute. Sprinkle the flour around the pot and stir for a minute before adding 3 cups of chicken broth.

Using a food process or immersion blender, blend the remaining cup of broth with about 2 cups/half the beans until smooth. Add to the pot along with the remaining 2 cups of beans and chicken. Bring to a boil, and then reduce the heat. Simmer for 15 minutes, and then add the half and half/cream to warm through. Season with salt and pepper to taste. Serve the soup topped with the bacon crumbles.