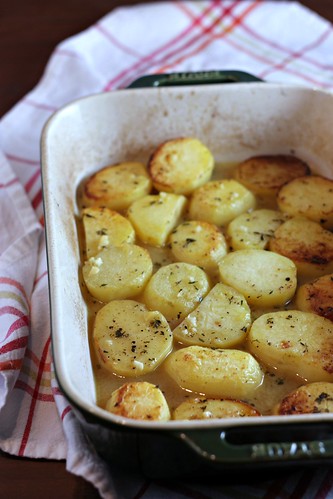 It occurred to me recently that I don’t even have a “side dish” category on here. Don’ get me wrong, I do love side dishes—sometimes even more than the main course—so I’m not entirely sure why this is the case. In the more recent years it probably has something to do with cooking being more a survival mechanism than a joy, which in turn makes side dishes a bit of an afterthought. Salad, blanched or roasted vegetables + bulgur or rice. Done.

When I do potatoes as a side (rare these days, especially non-sweet potatoes), I usually just roast them. They’re easy and pretty fabulous that way (particularly if you’re using fingerling potatoes). I’ve had this version saved for a while, though, and decided to make them recently when my meatloaf-obsessed child requested meatloaf. Meatloaf begs for some type of potato as a side, so I settled on these.

The cooking method for these potatoes is not terribly different from how I make my Greek lemon-oregano roasted potatoes, so I knew they’d be a hit. You roast the potatoes for a while to develop a golden, crisp exterior, and then you add chicken broth and roast them again. The broth makes the potatoes soft and tender on the inside. These potatoes are incredibly creamy and delicious.

The whole family loved these, even Zachary, who is weirdly finicky about potatoes. He hates mashed potatoes (see? weird), likes fries (duh) and crispy roasted potatoes, but isn’t a fan of softer potatoes like baked potatoes or those in stew or soup. Since these are a combination of crisp and soft, I didn’t know which way he’d go but he placed firmly in the “like” camp and asked for seconds (yay! but also boo! because that’s less for me). 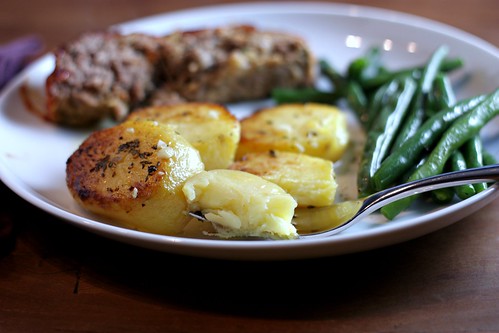 Preheat the oven to 450º and place a rack in the upper middle position.* Square the ends of the potatoes off by slicing just a little off the top and bottom (so that they are flat on both sides). Then, slice the potatoes into 1-inch thick slabs.

In a large bowl, toss the potatoes with the butter, thyme, salt, and pepper. Place the potatoes in a single layer in a large metal or ceramic baking dish.* Roast the potatoes for 18-20 minutes, until the bottoms are browning around the edges. Flip the potatoes over using tongs or a turner and roast for another 15 minutes.

Remove the pan from the oven, flip the potatoes one more time, and add the chicken broth and garlic. Place back in the oven one last time, for about 15 minutes, until potatoes are soft in the center and the broth/sauce has reduced slightly. Serve with sauce drizzled over the top.

*My potatoes didn’t quite fit all in one dish, so I put some in another and rotated the pans during baking. Don’t use glass dishes, as they may shatter when you add the broth.