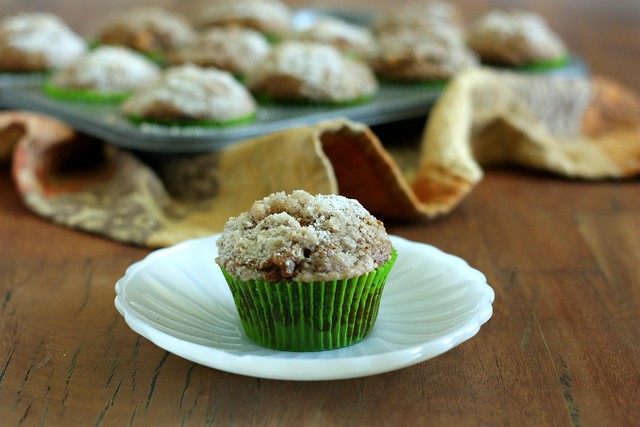 I don’t know how  many pumpkin muffin and bread recipes one blog needs, but I’m just going to go with “never enough.” I’m not quite as fanatical about pumpkin as many people are (don’t get me wrong, I DO love it, I’m just not dying to get my hands on pumpkin spice meatloaf or something), but I’m not going to deny its awesomeness in baked goods. Adding pumpkin puree to baked goods makes them incredibly moist, and since pumpkin is a superfood, it obviously turns everything you make healthy.

Truly, though, I did make these pretty healthy. I’m pretty good at making lower calorie muffins that are good but those usually don’t include streusel, which is like a whole other superfood, at least in my book. These don’t have quite as much butter in the topping, but they still give you that streusel-y goodness. The muffins themselves are made with white whole wheat flour, a minimal amount of sugar considering how many muffins this makes, and clock in right around 200 calories each, which isn’t bad at all.

The recipe makes 18-20, which is kind of annoying, sorry. I try not to do that but it just worked best this time, with proportions. What we did is fill a 12-well muffin tin and then as many mini muffins as we could; I think we got around 16. The boys took 2 mini muffins to school each morning with some yogurt for breakfast. They helped make these with me, and they love not only to assist with baking, but with telling their teachers the next morning allllll the ingredients that went into them. 🙂

Pumpkin Muffins with Apple and Streusel

Whisk together the flour, cinnamon, nutmeg, ginger, cloves, salt, baking soda, and baking powder in a medium bowl. In a larger bowl, whisk or beat the sugar and oil until well combined, then add the molasses and eggs, mixing until combined. Beat in the vanilla, milk, and pumpkin puree. Add the dry mix to the wet mix, stirring until just incorporate. Fold in the raisins, apple, and about 4 tablespoons of the pepitas (if using). Fill each muffin will about 2/3 full.

In a small bowl, use a fork to combine the sugar, flour, cinnamon, and butter. Stir in the remaining pepitas, if using. Diving the mixture among the batter-filled cups. Bake for about 22-26  minutes, or until a toothpick in the center comes out clean.

Pumpkin Muffins with Apple and Streusel

2 thoughts on “Pumpkin Muffins with Apple and Streusel”