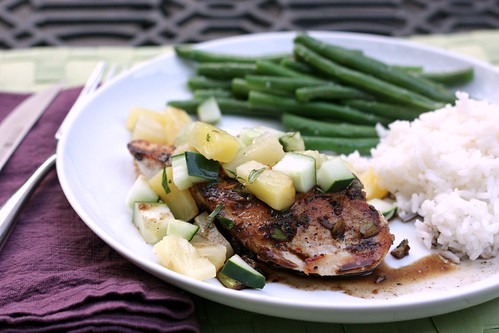 Chicken breasts are…not terribly exciting. We eat a fair amount of them because they’re healthy and basically a blank canvas but they are certainly no one’s protein of choice in this household, if I’m being honest (I mean, they’re not even our chicken of choice, being that we all prefer dark meat). When you find a new chicken dish that’s not only healthy but also really quick and flavorful, it’s pretty exciting. (Hey, I’m a 9-5 suburban mom; we get excited about lame things, okay?)

This chicken uses jerk flavors, but in the form of a pan sauce vs. a marinade you’re probably used to. There are a few benefits to making a jerk pan sauce vs. a jerk marinade. For one thing, if you don’t think your kids or other family members will want the spice, it’s easy enough to not add the sauce to their portion (Ian is fine with spice but Zachary has recently started having issues with it, so his portion was served without sauce but with allspice sprinkled directly to his chicken). The other thing is it’s quicker. Sure, marinades don’t take much time, but being able to get this done in one fell swoop instead of over two prep periods is nice. This was easily as flavorful as other jerk marinades I’ve used. The habañero (or scotch bonnet) gets sauteed so it isn’t quite as spicy as  you might think, but it does retain much of its heat since it’s actually being used in the sauce (vs. in a marinade where it will impart flavor but potentially fall off before actually being cooked).

I will totally cop to using a can of pineapple tidbits here due to laziness. I probably should have/could have chopped the tidbits more finely but ehhh. I said a few months back that relishes are my new thing and that still holds true. And since one of the reasons I love them is they add flavor without being difficult or time consuming, I decided another shortcut was not a bad idea. 🙂

Adapted from Ellie Krieger’s The Food You Crave

For the salsa: In a small bowl whisk together the honey and the lime juice in a medium bowl. Add the pineapple, cucumber and mint and toss to combine. Set aside.

For the chicken: Season the chicken lightly with salt and pepper. Heat a large skillet over a medium-high heat, and then add 2 teaspoons of olive oil.  Once hot, add the chicken breasts and cook for about 4 minutes on each side, or until browned and cooked through. Transfer the chicken to a plate and cover to keep warm.

Add the remaining 2 teaspoons of oil to the pan. Stir in the scallions, pepper, garlic, ginger, allspice, and thyme. Cook for 30 seconds over a medium heat. Add the chicken broth and soy sauce, being sure to scrape up any browned bits from the pan, and cook until liquid is reduced by half, about 3 minutes. Stir in the lime juice. Put the chicken back in the pan and coat well with the sauce.

Serve with the pineapple salsa.

2 thoughts on “Chicken with Jerk Sauce and Pineapple Salsa”