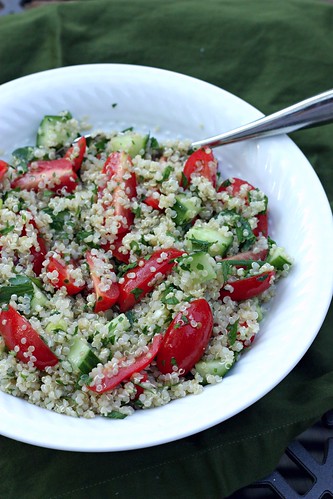 Even though I have long (LONG) been obsessed with fattoush, I was never a huge fan of tabouli growing up. I think maybe it was too much fresh parsley for me, which sounds silly considering there is a decent amount in fattoush and plenty in Greek cooking, but for some reason tabouli didn’t do it for me. Plus, I’ve only recently come around to mint in savory foods (and our mint plant is out of control, so I guess that’s  a good thing).

I’ve had it a few times as an adult and though it will never replace my beloved fattoush, I find that I enjoy it much, much more now. I love bulgur, but we were really low on it when I decided to make tabouli, so I used quinoa instead. It’s a great substitute but both are really healthy and good for you so this isn’t one of those times when quinoa necessarily adds a ton of added benefits (it does add slightly more protein and has fewer carbs). I of course increased the lemon juice/ratio to oil and did decrease the mint by a bit.

We had this one night with a pork tenderloin I marinated in my shawarma marinade and the roasted vegetables with za’atar and it was definitely one of my favorite recent meals (but I could eat Middle Eastern food every day so I guess  you’ll have to take that for what it’s worth). While Zachary was asking for more zucchini over and over, Ian kept asking for more quinoa, so things ended up working out perfectly. 🙂 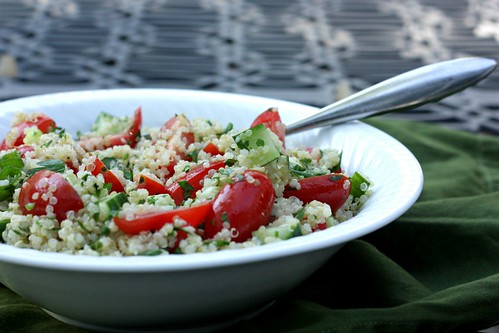 In a small bowl, whisk together the lemon juice, oil, garlic, and salt and pepper to taste.

Place the cooled quinoa in a large bowl and mix it with about half the dressing. Add the cucumbers, tomatoes, parsley, mint, scallions and remaining dressing. Season to taste with salt and pepper if necessary.